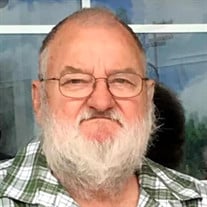 Larry Lee Tipton, age 75 of Mattoon, IL formerly passed away at 5:00 AM, Tuesday, November 10, 2020 at Sarah Bush Lincoln Health Center in Mattoon, IL. A memorial service will be held at a later date. Mitchell-Jerdan Funeral Home, located at 1200 Wabash Avenue, Mattoon, IL 61938 is in charge of arrangements. Larry was born on September 12, 1945 in Alton, IL to the late Harry W. and Phoebe E. (McGarrah) Tipton. He married Teresa “Terri” J. Harvell on May 25, 1968 in Woodstock, IL. He is survived by his wife of fifty-two years, Terri Tipton of Mattoon, IL; one son, Keith W. Tipton; two granddaughters, Alyssa N. Tipton and fiancé Jason Funderburg of Monterey, CA, Ashley T. Bateman and husband Steven of Greenfield, CA; three great-grandchildren: Holden L. and Jordan K. Funderburg, Sophie G. Bateman; one brother, Charles “Chuck” Tipton of Mattoon, IL; two sisters, Evelyn M. Pipken and Harriet J. Matthews, both of Alton, IL. He is preceded in death by one son, Larry Lee Tipton, JR.; and one brother, Joseph “Joe” Pipken, JR. Larry honorably and proudly served our country in the US Army during the Vietnam War. He later became a machinist for GK Indexable Inc. in Crystal Lake, IL. After his retirement in 2009, Larry and his wife, Terri, moved to Mattoon, IL to be closer to family. He could often be found tinkering in the garage, gardening, and bird watching. Always one to be up bright and early, Larry enjoyed his morning breakfast and seizing his day. Larry was deeply committed to his family. He was a loving husband, father, and grandfather. His memory will live on through the hearts of his loved ones. Please visit www.mitchell-jerdan.com or www.facebook.com/mitchelljerdanfuneralhome to light a virtual candle in his honor.

The family of Larry Lee Tipton created this Life Tributes page to make it easy to share your memories.

Send flowers to the Tipton family.