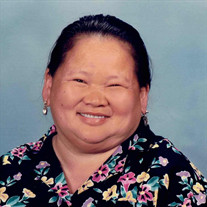 Mattoon, IL – LaHer Vang, age 80, of Mattoon, IL, passed away at 11:52 a.m., on Tuesday, November 24, 2015, at Carle Foundation Hospital in Urbana, IL. A funeral service in her honor will begin at 11:00 a.m., Saturday, December 5, 2015, at Mitchell-Jerdan Funeral Home, 1200 Wabash Avenue, Mattoon, IL 61938. Pastor Kevin Wolfe will officiate. Visitation will be held at the funeral home from 9:00 a.m. until the service begins. A close family second service officiated by Pastor Sue Lee will follow at 3 pm. Private burial will take place Monday, December 7 in Sun Prairie Memory Gardens, in Sun Prairie, WI, officiated be Pastor Sue Lee. Born February 8, 1935, in Laos, she was the daughter of Pangker Her and Chung Moua. She married JuTeng Vang in 1959. He passed away in 1991. Survivors include six children, Yang "John" Vang and wife MeeHer of Mattoon, IL, Don Vang and wife Keo of Onalaska, WI, Joua "Julie" Her and husband Kao of Thornton, CO, Pang Yang and husband Nou Blong of Neenah, WI, daughter, Zoua Vang of Mattoon, IL, and son, Wong Vang of Mattoon, IL; step-child; Blong "Bruce" Vang and wife Kia of Mattoon, IL; a sister, Joua Yang and husband Pang Ger of St. Paul, MN; Seventeen grandchildren; and eleven great-grandchildren. In addition to her husband, she was preceded in death by her parents and three sisters and one brother. Mrs. Vang was a homemaker and a member of the Broadway Christian Church. She cherished her family and loved caring for them. She also had a special place in her heart for her dogs.

The family of Laher Vang created this Life Tributes page to make it easy to share your memories.

Send flowers to the Vang family.