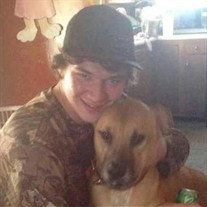 Kody Robert Matheny, age 23 of Mattoon, IL tragically passed away at 12:40 P.M. Thursday, August 9, 2018 at his residence. A funeral service in his honor will be held Wednesday, August 15, 2018 at 7:00 P.M. at Mitchell-Jerdan Funeral Home, 1200 Wabash Avenue, Mattoon, IL 61938; Reverend Ed Stephens will officiate. Burial will be held at a later date. Visitation will be from 5:00 P.M. until the time of service at the funeral home. Kody was born in Mattoon, IL on January 1, 1995, the son of Robert L. Matheny and Shari L. Lovell. He is survived by his loving mother Shari L. Collier and her husband Dale “Pops” Collier of Mattoon, IL; two brothers, Jakeb Snader of Mattoon, IL, Rylan Matheny of Mattoon, IL; grandparents, Bobby Matheny of Mattoon, IL, Pat Peterson of Columbia, MO, Keith and Diana Fearday of Neoga, IL, Lari Lovell of Rutherford, TN; and several aunts, uncles, and cousins. He is preceded in death by his father; “Papa” Terry Peterson; “Granddaddy” Clyde Lovell; and his beloved dog and best friend, Boomer. Kody was an avid outdoors man with a passion and life-long dream to become a Conservation Officer. He loved hunting, fishing, and target shooting. He was an expert in bird calling and had an impressive gun collection. His intelligent nature drove him to want to know how things worked but also why they worked. He had an appreciation for art and country music, he often sang as loud as he could. The most important thing to Kody was his family and his love for them was immeasurable, they will miss him greatly. Please visit www.mitchelljerdan.com or www.facebook.com/mitchelljerdanfuneralhome to light a virtual candle in his honor or share a memory with the family.

The family of Kody Robert Matheny created this Life Tributes page to make it easy to share your memories.

Send flowers to the Matheny family.