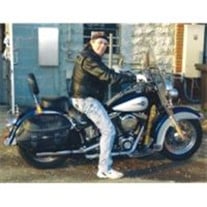 Mattoon, IL-Kenny 'Cookie' Cook, age 59, of Mattoon, IL, passed away at 9:30 a.m., Thursday, January 8, 2015, at his residence.\r\n\r\nThe funeral service in his honor will begin at 5:00 p.m., Monday, January 12, 2015, at Mitchell-Jerdan Funeral Home, 1200 Wabash Avenue, Mattoon, IL, with Reverend David Baldwin officiating. Interment will be held at a later date. Visitation will be held from 3:00-5:00 p.m., at the funeral home. \r\n \r\nBorn in Mattoon, IL, on August 30, 1955, Kenny was the son of R. Huxley and Nan L. (Sewell) Cook. He married Jackie A. Hassinger on January 27, 2004. She survives. Other survivors include one daughter, Blair Fulton of Mattoon, IL; four step-children, Kim Adams of Mattoon, IL, Gary Adams and wife Dana of Iola, IL, Daniel Adams and wife Jennifer of Sullivan, IL, and Chad Adams of Mattoon, IL; one brother, Steve Cook with Barb Daily of Gays, IL; two sisters, Jo Ellen Young and husband Keith of Gays, IL, and Kay Lanter of Bloomington, IL; two grandchildren, NaKendra 'Nik' Fulton and Nasiir 'Bub' Fulton, both of Mattoon, IL; and fifteen step-grandchildren. He was preceded in death by his parents. \r\nKenny retired from the City of Mattoon Public Works Dept and was a member of the AFSCME AFL-CIO Union Local 3821. He was a lifetime member of the Sons of the American Legion, past member of the Eagles and Moose Lodges of Mattoon and the Mattoon Pranksters. \r\n\r\nMotorcycle rides, attending car shows, fishing, and reading, especially autobiographies, were some of his favorite hobbies. He was an avid St. Louis Cardinals, Illini, and Chicago Bears fan. He cherished his family, treasured his friends, and will be deeply missed. \r\n\r\nMemorials in his honor may be made to the Lincolnland Hospice. \r\n\r\nPlease visit www.mitchell-jerdan.com or www.facebook.com/mitchelljerdanfuneralhome to light a virtual candle in his honor or share a memory with his family.\r\n

The family of Kenny "Cookie" Cook created this Life Tributes page to make it easy to share your memories.

Send flowers to the Cook family.