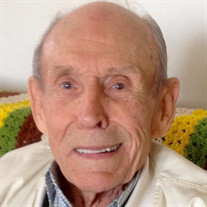 Kenneth “Kenny” LeeRoy Bean, age 97 of Mattoon, IL passed away at 2:20 PM, Tuesday, June 16, 2020 at Hilltop Nursing Home in Charleston, IL. A graveside service will take place at 1:00 PM, Saturday, June 20, 2020 at Dodge Grove Cemetery; Pastor Chris Walters will officiate. Military Rites will be conducted by Mattoon VFW Post 4325. Mitchell-Jerdan Funeral Home, located at 1200 Wabash Avenue, Mattoon, IL 61938 is in charge of services. Kenny was born on August 5, 1922 in Humboldt, IL, the son of the late Chester and Ida (Stephens) Bean. He married Marion “Billie” Loraine Mowery on July 23, 1953; she preceded him in death on September 12, 2000. He is survived by one daughter, Sue Davis and husband Jerry of Charleston, IL; three grandchildren, Angie Wood and husband Jim of Quincy, IL, Joe Thomas and wife Heidi of Cooks Mills, IL, Nick Thomas and wife Mandy of Mattoon, IL; ten great-grandchildren; seven great-great grandchildren; three nieces, Jerri Sue, Loretta Fuller and Marlene Highland; and two nephews, Dickie and Don Bean. He is preceded in death by four brothers and one sister. Kenny honorably served our country with distinction alongside his comrades in the Army, stationed in Anzio, Italy and Africa during WWII. He was proud member of Mattoon Moose Lodge and Mattoon VFW Post 4325. He was co-owner of Decker’s Body Shop in Mattoon, IL. Kenny was a man-of-all-work and truly believed if he could not fix it, it was never broken. He enjoyed fishing and spending time with his family. Grandchildren, great-grandchildren, great-great grandchildren topped his list of favorites and he spoiled them as only as Gramps could. Kenny always looked for ways to help someone in any way he could, often sharing his heart, home, and time. Please visit www.mitchell-jerdan.com or www.facebook.com/mitchelljerdanfuneralhome to light a virtual candle in his honor or share a memory with the family.

The family of Kenneth "Kenny" LeeRoy Bean created this Life Tributes page to make it easy to share your memories.

Send flowers to the Bean family.