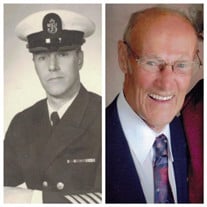 Kenneth “Ken” E. Gagnon, age 86, of Mattoon, IL passed away at 12:00 PM, Sunday, August 18, 2019 at Life’s Journey Senior Living surrounded by his wife and five children. A funeral service in his honor will be held at 10:00 AM, Saturday, August 24, 2019 at the First Presbyterian Church, 10 Charleston Avenue, Mattoon, IL; Reverend Matthew Froeschle will officiate. A committal service will immediately follow in Dodge Grove Cemetery in Mattoon. Military Rites will be performed by Mattoon VFW Post 4325. A visitation will be held Friday evening, August 23, 2019 from 4:00 PM-7:00 PM at Mitchell-Jerdan Funeral Home, 1200 Wabash Avenue, Mattoon, IL 61938. Ken was born on July 13, 1933 in Fargo, ND, the son of Norris and Nellie Joy (Brawders) Gagnon. He married Loretta Fish on March 8, 1957 in Washington, DC. Ken is survived by his wife of 62 years, Loretta Gagnon of Mattoon, IL and five children: Patti (Richard) Lee of Mattoon, IL, Sheri Moberley of Mattoon, IL, Joni (Juan) Montejo of Salt Lake City, UT, Lori (David) Woodyard of Mattoon, IL and Ken Gagnon, JR of Mattoon, IL. He also had seven grandchildren: Jennifer (Matthew) Roth of O’Fallon, MO, Donny (Hanna) Moberley of Cobden, IL, Jolene (Adam) Funk of Mattoon, IL, Anna (Ross) Summerford of Madison, AL, Jeremy Woodyard of St. Louis, MO, Jacob Woodyard of Mattoon, IL, and Hunter Warner of Fort Lejeune, North Carolina. He had five great-grandchildren: Anderson Roth, Samuel Roth, Heinrich Moberley, Friedrich Moberley, and Everly Funk. He was preceded in death by his parents and his two sisters, Carol Travis and Bonnie Schmidt. Ken served in the U.S. Navy from June 1951 to May 1972. He served his country in many capacities, including the U.S. Naval Ceremonial Guard in Washington, DC, Corpsman in Key West, FL and on the USS Haven, USS Tawasa and USS Yorktown Pacific Fleets. He also served in Quantico, VA, the Great Lakes, San Diego, CA, Guam and Newport, RI. In 1972 when he retired from the U.S. Navy, he moved his family to Mattoon, IL where he was the Trauma Coordinator for the Illinois Department of Public Health at Memorial Hospital which later grew into Sarah Bush Lincoln Health Center. When that position was cut due to budget reduction in Public Health, he started up the EMS Training Coordinator at Lake Land College and worked there from 1982 until his retirement in July of 1998. One of his most rewarding experiences while representing the college was when he sat on the board of governors to the National Association of Emergency Medical Trainers and was involved an exchange program with a team of Soviet EMT’s that brought new advances in the medical field in Russia and Germany. Ken was involved with many organizations. He was a member of the Mattoon Lions Club, a past District Governor and an Ambassador of Goodwill for the Lions of Illinois Foundation. He was on the Mattoon Revolving Loan Fund Committee, a Coles County Election Judge, a manager of the Junior Babe Ruth League, an area scouting coordinator of the Boy Scouts of America, and a member of the Finance Committee of the American Association of Physician Assistants. He belonged to the Mattoon First Presbyterian Church where he previously served as a Deacon, Trustee and Elder. While in the Navy he enjoyed participating on several bowling leagues and winning numerous trophies. In later years he donated many of his trophies to Camp New Hope. He was an avid Dodgers baseball and Hoosiers basketball fan. He also enjoyed spending time at various ballgames of his children and grandchildren. He never knew a stranger. Memorials in his honor are to be made to the Mattoon Lion’s Club PO Box 242, Mattoon, IL, Alzheimer’s Association Illinois Chapter, 8430 W. Bryn Mawr Ave #800, Chicago, IL 60631 or the First Presbyterian Church, Mattoon, IL. Please visit www.mitchell-jerdan.com or www.facebook.com/mitchelljerdanfuneralhome to light a virtual candle in his honor or share a memory with the family.

The family of Kenneth E. Gagnon created this Life Tributes page to make it easy to share your memories.

Send flowers to the Gagnon family.