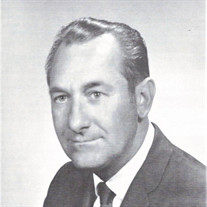 Kenneth Glen Easton, age 98 of Neoga, IL formerly of Mattoon, IL and Joliet, IL passed away Tuesday, May 4, 2021 at Heartland Senior Living in Neoga, IL. A funeral service honoring his life will be held at 1:00 PM, Tuesday, May 11, 2021 at Mitchell-Jerdan Funeral Home, 1200 Wabash Avenue, Mattoon, IL 61938. Pastor Brad Brown will officiate. A committal service will immediately follow at Dodge Grove Cemetery. Military Rites will be conducted. A visitation will be held at 10:00 AM until the service begins at the funeral home. Masonic Funeral Rites will be presented at 9:30 AM by Mattoon Masonic Lodge #260 prior to the visitation. The eldest of eleven children, Kenneth was born on January 7, 1923 in Mattoon, IL, to the late Omer O. and Inza B. (Reagin) Easton. He married Hazel F. Duncan on August 25, 1946 in Humboldt, IL; she preceded him in death on October 31, 2008. He is survived by four brothers: Harold Easton of Mattoon, IL, C. Dean Easton and wife Rebecca of Bloomington, IL, Robert Easton of Coal City, IL, William Easton and wife Meriul of Hermitage, TN; two sisters, Virginia Driskell and husband James of Neoga, IL, Sharon Dalton and husband Ronald of Gilbert, AZ; and over one hundred nieces and nephews. He was preceded in death by one brother, Wendell Easton; and three sisters, Margaret Cox, Charlotte Lawyer, Marilyn Janes, four brothers-in-law, Elmer Ground, Ralph Cox, Howard Lawyer, Wayne Janes; three sisters-in-law, Olive Easton, Nancy Easton, and Wanda Easton. After marrying the love of his life, Kenneth and Hazel lived in Mattoon, IL until 1971 when his electrical trade relocated them to Joliet, IL. In 2018 he returned to Mattoon, IL and resided at Brookstone Estates until he ultimately moved to Heartland Senior Living in Neoga, IL. Honorably, Kenneth served in the United States Army during World War II and was stationed in Normandy, France just after the invasion and later transferred to England, Germany, and Italy. He was a life member of the VFW Post#4325, and the American Legion in Mattoon, IL. Kenneth was the author of two volumes of “Richard Easton, His Descendants and Allied Families”. He and his wife spent over fifty years in genealogy research. Kenneth was very active in all phases of Masonry, being a member since 1962 and Past Master of Mattoon Lodge #260 A.F. & A.M. He was an honorary member of Matteson Lodge #175, Mt. Joliet Lodge #42, Elwood Lodge #919, Peotone Lodge #636, and Braidwood Lodge #704. He served the Grand Lodge of Illinois as a Grand Lecturer and was active on the Education Committee and the Illinois Lodge of Research. Kenneth was elected to Holy Arch Knights Templar Priests, Lily of the Valley Chapter of Decatur, IL serving as Commander in 1990. He also belonged to the York Rite College# 81, Ansar Shrine, Joliet Chapter #27, Joliet Council #82, and Joliet Commandery #4. He received the Order of the Purple Cross in 2000. Joining the Scottish Rite, Valley of Danville, in 1968, Kenneth was active in several degrees. In 1983 at Milwaukee, WI, He received the high honor of the Thirty-third Degree. The fall, 2002 consistory class was named after him for his dedication to the craft. An outstanding Christian man, Kenneth was proud of his heritage, and extremely proud of America. Please visit www.mitchell-jerdan.com or www.facebook.com/mitchelljerdanfuneralhome to light and candle in his honor or share a memory with the family.

Kenneth Glen Easton, age 98 of Neoga, IL formerly of Mattoon, IL and Joliet, IL passed away Tuesday, May 4, 2021 at Heartland Senior Living in Neoga, IL. A funeral service honoring his life will be held at 1:00 PM, Tuesday, May 11, 2021 at Mitchell-Jerdan... View Obituary & Service Information

The family of Kenneth G. Easton created this Life Tributes page to make it easy to share your memories.

Send flowers to the Easton family.