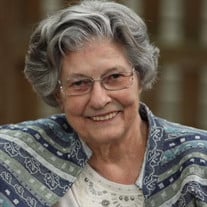 Kathleen S. Steward, age 94 of Lone Tree, CO formerly of Mattoon, IL passed away at 6:40 A.M. Tuesday, September 11, 2018 at her residence. A funeral service in her honor will be held Saturday, September 29, 2018 at 10:00 A.M., Immaculate Conception Catholic Church, 320 N. 21st Street, Mattoon, IL 61938; burial will immediately follow at Dodge Grove Cemetery in Mattoon, IL. The visitation will be held one hour prior at 9:00 A.M. until the time of service at the church. Mitchell-Jerdan Funeral Home is assisting the family with arrangements. Kathleen was born on November 15, 1923 in Mattoon, IL, the daughter of the late Ivan and Catherine (Connell) Snowden. She married Dr. Lee Steward on June 14, 1948; he passed away December 19, 1988. Kathleen is survived by her four children: one son, James E. Steward and wife Jean of McHenry, IL; three daughters, Patricia L. Cindric and husband Carl of Littleton, CO, Marilyn J. Steward of Springfield, IL, Susan S. Lukach and William of Fairfax, CA; six grandchildren, Christopher J. Steward and wife Collen of Crystal Lake, IL, Timothy J. Steward of Round Lake, IL, Kathryn M. Federhar and husband Lars of Highland Ranch, CO, Emilie A. Nickoloff and husband David of Highland Ranch, CO, Captain William J. Lukach of Boise,ID, Grace K. Lukach of Oakland, CA; five great-grandchildren, Chloe Steward, Clairwyn Steward, Sofia and Olivia Nickoloff, and Lucille Federhar. She is preceded in death by her parents, husband, two brothers, and one sister. Kathleen was a member of The Immaculate Conception Church and served on The Immaculate Conception Parrish Council. She was President of Sarah Bush Lincoln Health Care Ladies Auxiliary, served on the board of directors of Central National Bank. Kathleen and her husband were awarded The Will Tone Award. She enjoyed traveling the world but her favorite place to be was with her family. They will miss her greatly. Please visit www.mitchell-jerdan.com or www.facebook.com/mitchelljerdanfuneralhome to light a virtual candle in her honor or share a memory with the family.

The family of Kathleen S. Steward created this Life Tributes page to make it easy to share your memories.

Send flowers to the Steward family.