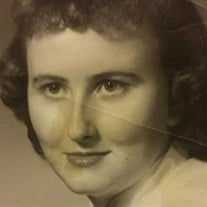 Mattoon, IL – Kathleen Ann Cooley, age 76, of Mattoon, IL, passed away at Carle Foundation Hospital at 3:10 p.m., Friday, December 16, 2016. The graveside service in her honor will begin at 11:00 a.m., Wednesday, December 21, 2016 at Resthaven Memorial Gardens, with Reverend Richard Eident officiating. Mitchell-Jerdan Funeral Home, 1200 Wabash Avenue, Mattoon, IL 61938, is assisting the family Mrs. Cooley was born November 10, 1940 in Litchfield, IL, the daughter of Robert William and Mildred (Roach) Oller. She married Leo Edward Cooley on April 27, 1968, in Montgomery County IL. He preceded her in death on May 29, 2003. Kathleen is survived by six children, Erin Dineen and husband Dwayne of Farmersville, IL, Lisa Gorman Barry of Farmersville, IL, Todd Gorman of Litchfield, IL, Kelly Gorman of Mattoon, IL, Robert Cooley and his wife Laurie of Decatur, IL, and Kevin Cooley and his wife Penny of Mattoon, IL; one brother, Robert Oller and his wife Judy of Collinsville, IL; one sister Patricia Vega and her husband David of Litchfield, IL. Fourteen grandchildren, eleven great-grandchildren, and many nieces and nephews. Besides her husband, Kathleen was preceded in death by her parents, and one grandchild, Brenna Gorman. Mrs. Cooley had been previously employed by Wal-Mart and Taylor's IGA. She was a member of the Kingdom Hall of Jehovahs Witness. She was also a member of the VFW Ladies Auxiliary. In her free time, she enjoyed crossword puzzles and bowling. She was an animal lover and was happiest living on a farm raising llamas and emus. Kathleen was a wonderful mother and grandmother. She cherished her family and will be deeply missed. Please visit www.mitchell-jerdan.com or www.facebook.com/mitchelljerdanfuneralhome to light a virtual candle in her honor or share a memory with her family.

The family of Kathleen Cooley created this Life Tributes page to make it easy to share your memories.

Send flowers to the Cooley family.