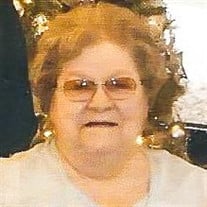 Mattoon, IL – Karen A. Mingus, age 74, of Neoga, IL, passed away at 9:40 p.m., July 28, 2016, at the Heartland Christian Village of Neoga, IL. The funeral service in her honor will begin at 10:00 a.m., Tuesday morning, August 2, 2016, at Mitchell-Jerdan Funeral Home, 1200 Wabash Avenue, Mattoon, IL 61938. Reverend Paul Hopkins will officiate. Interment will follow in Resthaven Memorial Gardens. Visitation will be held Monday evening at the funeral home from 6:00-8:00 p.m. Born January 20, 1942, in Mattoon, IL, Karen was the daughter of James H., Jr., and F. Maxine (Edwards) Anderson. She married Ernest Eugene Mingus on March 23, 1977 in Mattoon, IL. He passed away on September 30, 1991. Survivors include one daughter, Angelyne Rhoads and husband Gary of Charleston, IL; four step-children, Penny Lee Grice and husband John of Tolono, IL, Jerry Mingus; Thomas Mingus, and Patricia Mingus; One brother, Terry K. Anderson and wife Jean of Mattoon, IL; Two grandchildren, Dawson Rhoads of Charleston, IL, and Piper Rhoads of Charleston, IL; Several step-grandchildren and great grandchildren; and eleven nieces and nephews. In addition to her husband, she was preceded in death by her parents; one brother, Bill Anderson; and a step-son, Dan Mingus. Karen was a graduate of Lake Land College and had earned an Associate in Applied Science Degree in Accounting. Prior to retiring in 1988, she was employed by General Electric. She was a member of the St. Paul’s Lutheran Church of Dorans. In her free time, she enjoyed knitting, crocheting, and reading. However, nothing gave her more joy than time spent with her family. Memorials in her honor may be made to the charitable organization of the donor’s choice. Please visit www.mitchell-jerdan.com or www.facebook.com/mitchelljerdanfuneralhome to light a virtual candle in her honor or share a memory with her family.

The family of Karen A. Mingus created this Life Tributes page to make it easy to share your memories.

Send flowers to the Mingus family.