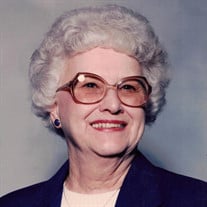 Julia “Joanne” Bolin, age 91 of Mattoon, IL passed away at 6:45 AM, Friday December 20, 2019 at Sarah Bush Lincoln Health Center in Mattoon, IL. A funeral service in her honor will be held at 11:00 AM, Monday, January 6, 2020 at Mitchell-Jerdan Funeral Home, 1200 Wabash Avenue, Mattoon, IL 61938; Reverend Ron Dickinson will officiate. A committal service will immediately follow in Resthaven Memorial Gardens. The visitation will be held the same day from 10:00 AM until the time of service. Joanne was born on May 24, 1928 in Sullivan, IL the daughter of the late Luther L. and Fern H. (Etnire) Lang. She married the love of her life, James “JD” David Bolin on May 11, 1946 in Sullivan, IL; he passed away on July 10, 1992. She is survived by two children, David Bolin of Panama City, FL, Sherri Arnholt and husband Robert of Mattoon, IL; six grandchildren: James Bolin(Amy) of Las Vegas, NV, Jerry Bolin (Cindy) of Pensacola, FL, Donovan Bolin (Tara) of Aurora, CO, Travis Bolin(Kim) of Parrish, FL, Tyler Arnholt (Rachael) of Danville, IL, Trevor Arnholt (Madison) of Dallas TX; and eight great-grandchildren: Kelton, Alexandria, James, Cameron, Whitney, Brittany, Maigan, and Jimmy; one daughter-in-law, Peggy Bolin of Mattoon, IL. She is preceded in death by one son, Terry Bolin and one sister, Pat McIlwain. Joanne was employed at IGA Grocery Store in the deli department. Her hobbies included cross-stitching, reading, and doing word searches. Joanne was an avid Chicago Cubs fan and was addicted to watching their games. She was more than pleased to witness their 2016 World Series victory. Joanne was member of the Ladies League at Etog Bowling Alley in Mattoon, IL and former Girl Scout Troop Leader. She loved playing the piano, boating, and the occasional gambling. Most of all, she relished in the moments spent surrounded by her family. Joanne was greatly loved and touched the hearts of many. She will always be remembered. Please visit www.mitchelljerdan.com or www.facebook.com/mitchelljerdanfuneralhome to light a virtual candle in her honor or share a memory with the family.

The family of Julia "Joanne" Bolin created this Life Tributes page to make it easy to share your memories.

Send flowers to the Bolin family.