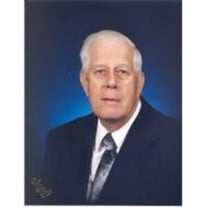 MATTOON - Joseph Alphonse Trame, age 81, of Mattoon, IL passed away at 10:15 p.m., Thursday, January 7, 2010 at his residence. A funeral mass honoring his life will begin at 2:00 p.m., Sunday, January 10, 2010, at Immaculate Conception Catholic Church, 320 N. 21st St., Mattoon, IL, 61938. Visitation will be held from 12:00 Noon until the time of service, also at the church. Mitchell-Jerdan Funeral Home, located at 1200 Wabash Avenue, Mattoon, IL, 61938, is in charge of arrangements. Joseph was born November 14, 1928 in Belleville, IL, the son of Theodore and Agnes (Spihlmann) Trame. He married Dorothy Eilering on July 2, 1951, in Breese, IL. He is survived by his loving wife, Dorothy of Mattoon, IL; three children, Joseph and Anieta Trame of Mattoon, IL, Karen Rogers of Louisville, KY, and Kenneth and Karen Trame of Tolono, IL. He leaves six grandchildren, Trever and Katherine Trame of Downers Grove, IL, Brent Trame and friend Lindsey Garretson of St. Louis, MO, Rachel Cushman and friend Eric Bertolet of Mattoon, IL, Sierra Trame of Knoxville, IL, Kurt Trame of Tolono, IL; and Kristinia Trame of Tolono, IL. He also leaves three great grandchildren, Elise Trame of Downers Grove, IL, Thad Cushman of Mattoon, IL, and Cholly Cushman of Mattoon, IL. He was preceded in death by his parents, one sister, and seven brothers. Joe had proudly served our country with the United States Army from 1951-1953, having served during the Korean War. He was a lifetime member of the VFW and a member of IOOF and the Eagles. He enjoyed time spent with his family and was a staunch St. Louis Cardinals Baseball fan. Memorials may be made to Immaculate Conception Church or the donor''s choice. Please visit www.mitchell-jerdan.com to light a virtual candle in his honor or share a memory with his family.

The family of Joseph A. Trame created this Life Tributes page to make it easy to share your memories.

Send flowers to the Trame family.