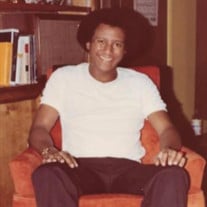 Jonathan Michael “Mike” Jackson of Mattoon, IL passed away suddenly at his residence in Mattoon, IL on December 28, 2021, to be with his heavenly Father. A graveside service in his honor will be held at 12:00 PM, Saturday, April 23, 2022, at Dodge Grove Cemetery in Mattoon, IL. Pastor Earl Matthews will officiate. The visitation will be held from 10:00 AM until the time of service at Mitchell-Jerdan Funeral Home, 1200 Wabash Avenue, Mattoon, IL 61938. All who attend the visitation will be asked to wear a mask. We will provide masks for those who do not have a mask. Honorary pallbearers are Tim Shaw, Greg Hopgood and Thomas Ward. Mike was born on August 14, 1953, in Chicago, IL to the late Reid H. and Rosa Estell Jackson. He is survived by two aunts: Clarice Estell Freeman of Houston, TX., Emelda Estell of Chicago, IL. Devoted cousins: Paula Butler Murphy, Tiare Douglas, Courtland Douglas IL, and Jordan Douglas of Antioch, TN., Doretta Estell Stark, of St. Paul, MN., Felicia (James) Carr, Eliane Estell Wilkins (Stephen) all of Chicago, IL., Janis (Albert) Bailey of South Holland, IL. Thomas F. Freeman Jr. (Deborah) of Crestview, FL., Dr. Carlotta Freeman of Los Angeles, CA., and Carter Freeman of Houston, TX and a host of other cousins and friends. He was preceded in death by his grandparents: George Harry Estell, Ada M. Gray Estell, Uncle: Harry Everett Estell, Aunts: Juanita Estell Williams, Vera Estell Harding. Mike was baptized at Immaculate Conception Catholic Church in Mattoon, IL. He attended St. Mary’s School of Mattoon, IL., James Yates High School of Houston, TX., and graduated from Mattoon Sr. High School in 1971. A devoted cousin and friend, Mike had a passion for sports, especially football and baseball. He was a loyal employee of Casey’s and had an easy laidback manner about him. Mike will be dearly missed by his family and everyone that knew him. Please visit www.mitchell-jerdan.com or www.facebook.com/mitchelljerdanfuneralhome to light a virtual candle in his honor or share a memory with the family.

Jonathan Michael &#8220;Mike&#8221; Jackson of Mattoon, IL passed away suddenly at his residence in Mattoon, IL on December 28, 2021, to be with his heavenly Father. A graveside service in his honor will be held at 12:00 PM, Saturday, April... View Obituary & Service Information

The family of Jonathan Michael "Mike" Jackson created this Life Tributes page to make it easy to share your memories.

Send flowers to the Jackson family.