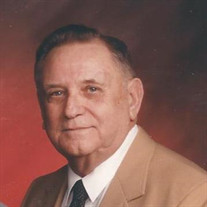 John David Wiley, Sr., age 92 of Gays, IL, passed away at 5:45 A.M. on February 25, 2018 at Carle Richland Memorial Hospital in Olney, IL. The funeral service in his honor will begin at 10:00 A.M., Thursday, March 1, 2018 at Mitchell-Jerdan Funeral Home, 1200 Wabash Avenue, Mattoon, IL, with Reverend Daniel Haifley officiating. Interment will immediately follow at Resthaven Memorial Gardens. The visitation will be held at the funeral home Wednesday evening, February 28, 2018, from 5:00P.M. to 8:00 P.M. Masonic Rites will begin at 4:30 P.M. Born July 12, 1925, in Mattoon, IL, John was the son of William “Bill” and Zelma (Butler) Wiley. He married Camilla “Rose” Shafer on July 21, 1943 in Sullivan, IL; she passed away September 15, 2016. They had one son, John D. “Jack” Wiley, Jr. of Parkersburg, IL; three grandchildren, Hope Wooldridge and husband Mark of Plainfield, IL, David Wiley and wife Lori of Paris, IL, and Terri Clodfelter and husband Kenny of West Salem, IL; and six great grandchildren. He was preceded in death by his wife, his parents, and one daughter-in-law, Nancy Wiley. John was a lifetime farmer of the family farm in Gays, IL. He was an active member in many fraternal organizations: Life member of the Masonic Lodge #260 of Mattoon, IL; past Master of Myles Hart Masonic Lodge in Gays, IL; Scottish Rite Valley of Danville, IL; York Rite of Sullivan, IL; Life member and retired manager of Moose Lodge of Mattoon, IL; and participant in Ritual Team for both the Masonic Lodge and Moose Lodge in Mattoon, IL. John appreciated his travels throughout the country with the Masonic Lodge but especially enjoyed traveling west to South Dakota. He was a devoted husband and loving dad and grandpa. He will be missed by all. Please visit www.mitchell-jerdan.com or www.facebook.com/mitchelljerdanfuneralhome to light a virtual candle in his honor or share a memory with the family.

The family of John D. Wiley Sr. created this Life Tributes page to make it easy to share your memories.

Send flowers to the Wiley family.