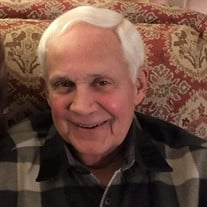 John Douglas Wiles passed away peacefully on September 23, 2019 at 10:15 P.M. at Carle Foundation Hospital in Urbana, IL with his family by his side A funeral service in his honor will be held at noon, Thursday, September 26, 2019 at Mitchell-Jerdan Funeral Home, 1200 Wabash Avenue, Mattoon, IL 61938; Reverend Matthew Froeschle will officiate. A committal service will immediately follow in Resthaven Memorial Gardens in Mattoon, IL. Military Rites will be performed by Mattoon VFW Post 4325. A visitation will be from 11:00 A.M. until the time of service at the funeral home. John was born on August 1, 1948 in Decatur Illinois. He married Debra Booker on November 3, 1972 and welcomed his beloved son, Douglas, in 1982. John was a 1966 graduate of Macon High School and Decatur Memorial School of Radiology Technology. He proudly served in the US Army. During his career, he worked at Decatur Memorial Hospital, Kirby Hospital in Monticello, and Sarah Bush Lincoln Health Center. In retirement, John and Debbie traveled the Midwest selling their gourd art and winning numerous awards and made many special friends along the way. John loved to fly-fish, travel and carve gourds. His most favorite times were with his family. John was a member of the First Presbyterian Church in Mattoon, IL John is survived by his wife and soulmate of 47 years, Debbie Wiles of Mattoon; son, Douglas (Kayla) of Mattoon, IL; brother Chuck Wiles (Lynette) of Mt. Carmel, IL sister-in laws Donna Ricketts (John) of Mobile, AL, Linda Wiles of Macon, IL; mother-in-law, Jane Booker of Monticello, IL; several nieces and nephews and his beloved grand dogs. He was preceded in death by his parents Charles and Mildred (Thornell) Wiles, father-in-law William Booker, brother James Wiles and nephew Chad Wiles. John was a great husband, father and uncle and will be greatly missed by all his family and friends and those he met along the art circuit. John’s family would like to sincerely thank the wonderful, caring nurses at Carle Oncology in Mattoon, Dr. James Egner and the nurses on the 6th floor at Carle Foundation Hospital. The simple words “thank you” cannot express our gratitude for all you said and did during this very difficult time. In lieu of flowers, memorials in John’s honor may be made to Carle Oncology Center, 2512 Hurst Drive, Mattoon, IL 61938 or Clay County Animal Rescue and Shelter, 14400 US-45, Louisville, IL 62858. Please visit www.mitchelljerdan.com or www.facebook.com/mitchelljerdanfuneralhome to light a virtual candle in his honor or share a memory with the family.

John Douglas Wiles passed away peacefully on September 23, 2019 at 10:15 P.M. at Carle Foundation Hospital in Urbana, IL with his family by his side A funeral service in his honor will be held at noon, Thursday, September 26, 2019 at Mitchell-Jerdan... View Obituary & Service Information

The family of John Douglas Wiles created this Life Tributes page to make it easy to share your memories.

Send flowers to the Wiles family.