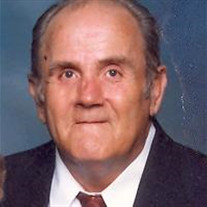 Mattoon, IL – John J. Tison, age 80, of Mattoon, IL, passed away at 2:05 a.m., Friday, February 17, 2017, at his residence. The graveside service in his honor will begin at 1:30 p.m., Thursday, February 23, 2017, at the Arcola Township Cemetery. Reverend Travis Spencer will officiate. Visitation will be held from 11:00 a.m. to 1:00 p.m. at Mitchell-Jerdan Funeral Home, 1200 Wabash Avenue, Mattoon, IL 61938. Born November 23, 1936, in Harrisburg, IL, John was the son of Robert and Ida (Blockinger) Tison. He married Erma Spelman on September 18, 1968, in Mattoon, IL. He is survived by his loving wife, Erma Tison of Mattoon, IL; three sons, Robert, Charles, and Kevin Tison, all of Mattoon, IL; one brother, George Tison, of Southern, IL; and three nieces and one nephew. He was preceded in death by his parents; one brother, Robert TIson; and two sisters, Rose Vines and Honor Hughes. Mr. Tison served our country with the United States Navy. Prior to retiring in 1998, he was employed with Blaw Knox for 33 years. In his free time, he enjoyed playing cards, and being outdoors hunting and fishing. Memorials in his honor may be made to the family. Please visit www.mitchell-jerdan.com or www.facebook.com/mitchell-jerdan.com to light a virtual candle in his honor or share a memory with his family.

The family of John J. Tison created this Life Tributes page to make it easy to share your memories.

Send flowers to the Tison family.