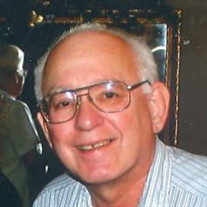 Gays, IL - John F. Powers, better known to everyone as "SPIKE POWERS,” went to be with his Lord and Savior, Jesus Christ, at 12:36 p.m., on Friday April 21, 2017. He was at Sarah Bush Lincoln Health Center due to complications with his dialysis procedures. He fought a long hard battle with type II diabetes which caused his need to have dialysis 3 days a week for 6 years. The funeral service in his honor will begin at 3:00 PM, Sunday April 30, 2017 at Mitchell Jerdan Funeral Home, 1200 Wabash Avenue, Mattoon, IL 61938. Bishop Dr. Andrew Robinson will officiate. Burial will be in Branchside Cemetery, Gays, IL. Visitation will be held at the funeral home from 2:00 p.m. until the service begins. Spike was born to John G. and Marion (Frommel) Powers on October 18 1941, in Charleston IL. Both parents are deceased. He married Linda Hortenstine on August 31, 1963. He is survived by Linda, his loving wife of 54 years; Their daughter, Alexis H. Stone; Twin grandsons, Paul and Joseph; Granddaughter, Melinda; Mother-in-law, Hattie Hortenstine; Brother-in-law, Douglas Hortenstine; Niece, Angie Rakestraw and husband John; and Nephew, Ryan Hortenstine and wife Jana, all of Gays, IL; Brother-in-law, Paul D. Hortenstine and wife Jacque; and niece, Danelle Hortenstine, all of Chattanooga, TN; Brother, James Powers, of Salt Lake City, Utah; Nephew, Ethan Powers and wife Jenni; eight great nieces and nephews, and two great-great nephews. Preceding him in death were his beloved Father-in-law, Paul A. Hortenstine; Sister-in-law, Martha Hortenstine; great nephews, Dexter Hortenstine, and Caleb Rakestraw; and several Frommel family members (no known Frommel survivors). Spike was baptized in Jesus name and received the Holy Ghost in obedience to Scripture Acts 2:38. This was his most treasured experience. He attended Christ Ministries-Acts Campus Ministry with Pastor Bishop Andrew Robinson, PhD. and Wanda Kay Robinson, Pastors wife on EIU's campus at Buzzard Hall. He loved singing with the Praise Singers, and meeting the EIU students who came to worship with ACTS. We're sure he is singing in heaven even now. He attended the Charleston school system and graduated from CHS in May with the class of 1959. In the fall of 1959 he and his buddy Larry, enlisted in the US Marine Corps. They were sent to Camp Pendleton in San Diego, CA for basic training, after which he was stationed for the balance of his peace time duty in Okinawa. He attended Sparks Business School, Winona School of Photography, and many short term photography courses. After Glaucoma took his eye sight in 2007 he was forced to close his studio, Spike Powers Photography after 40 years. Spike was a Certified Professional Photographer, member of Professional Photographers of America, and Wedding Photographers of America. He was a 25 year member of Associated Professional Photographers of Illinois, and served as an Executive Board Member for 2 years as membership Chairman. Hundreds of high school seniors, families, married couples, and businesses, will remember his excellent photography. He was truly a photographic artist. In lieu of flowers, memorials may be made to the Spike Powers Memorial Fund in care of Mitchell Jerdan Funeral Home. Please visit www.mitchell-jerdan.com or www.facebook.com/mitchelljerdanfuneralhome to light a virtual candle in his honor or share a memory with his family.

Gays, IL - John F. Powers, better known to everyone as "SPIKE POWERS,&#8221; went to be with his Lord and Savior, Jesus Christ, at 12:36 p.m., on Friday April 21, 2017. He was at Sarah Bush Lincoln Health Center due to complications with his... View Obituary & Service Information

The family of John "Spike" Powers created this Life Tributes page to make it easy to share your memories.

Send flowers to the Powers family.