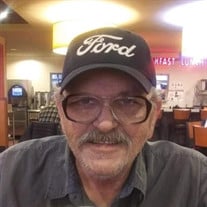 John Joe Craig, age 62 of Mattoon, IL passed away at 6:20 AM Thursday, February 10, 2022, at Sarah Bush Lincoln Health Center in Mattoon, IL. A funeral service in his honor will be held at 12:00 PM, Wednesday, February 16, 2022, at Mitchell-Jerdan Funeral Home, 1200 Wabash Avenue, Mattoon, IL 61938. Pastor Travis Spencer will officiate. A committal service will immediately follow at Fairview Cemetery in Kansas, IL. Military Rites will be conducted by Charleston VFW Post 1592. The visitation will be held from 10:00 AM until the time of service at the funeral home. John was born on August 28, 1959, in Charleston, IL to the late Clinton E. and Ada M. (Terrence) Craig. He married Margi Hendricks on July 15, 1987, in Champaign, IL; she survives and resides in Mattoon, IL. He is also survived by five children, Beth Jamison and husband Justin of Humboldt, IL, Dustin Craig of Paris, IL, Shawn Painter and wife Chrystol of Humboldt, IL, Sara Gray Harris and husband Brandon of Charleston, IL, Jeran Craig of Charleston, IL; four brothers, Clinton “Junior” Hughes and wife Beth of Oklahoma City, OK, Chris Frevele of FL, Floyd Hughes of FL, Floyd Craig of Charleston; three sisters, Charlene Hart of Mattoon, IL, Catherine Moses and husband Hoby of Kansas, IL, Heather Piper and husband Jeremy of Mattoon, IL; twenty six grandchildren, ten great-grandchildren, and his beloved dog Peanut. He was preceded in death by one brother, Duane Craig, one sister, Lilly Craig, two grandchildren, Autumn Carrell and Xzander Craig, and his stepmother. John was a proud veteran of the United States Army. He attended The Fields Church and Crossover Church both of Mattoon, IL. As a truck driver John had an appreciation for the open road and the scenery that surrounded him. It was a passion he also enjoyed while riding his Harley Davidson. Above all, John was a loving husband, father, grandfather, great-grandfather, brother, and friend. Family was his top priority. He will be deeply missed, and his family will be consoled by the warm memories he left behind. Please visit www.mitchell-jerdan.com or www.facebook.com/mitchelljerdanfuneralhome to light a candle in his honor or share a memory with the family.

The family of John Joe Craig created this Life Tributes page to make it easy to share your memories.

Send flowers to the Craig family.