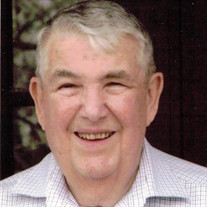 Joe Allen Fasig, age 88 of Marion, IL, formerly of Charleston, IL passed away at 11:24 AM, Saturday, February 29, 2020 at Barnes-Jewish Hospital in St. Louis, MO. A graveside service in his honor will begin at 11:30 AM, Friday, March 6, 2020 at Mound Cemetery in Charleston, IL; Father John Titus will officiate. Military Rites will be conducted by Charleston VFW Post 1592. A visitation will be held the same day at Mitchell-Jerdan Funeral Home, 1200 Wabash Avenue, Mattoon, IL 61938 from 10:00-11:00 AM. Joe was born on March 6, 1931 in Charleston, IL the son of the late Fred A. and Julia H. (Parker) Fasig. He married Nancy A. Woolford on August 28, 1954 in Charleston, IL and had a loving marriage for sixty-one years; she preceded him in death on April 13, 2016. Joe is survived by five children: Fred A. Fasig of Charleston, IL, Jim M. Fasig and wife Becky of Charleston, IL, Kathleen M. Mullen and husband Jeff of Ballwin, MO, Lisa A. Hudgens and husband Kerry of Marion, IL, Susan L. Mackin of Bellville, IL; eleven grandchildren; eight great-grandchildren; and one sister, Mary Ellen Andrews and husband Charles of Longview, TX. He is preceded in death by one brother. Joe honorably served our country in the United States Army Infantry and Signal Corps from 1948 until 1952. Throughout the years, Joe was a ham radio operator, skilled woodworker, and remarkable huntsman. In 1950, he was featured in the Chicago Tribune for the first legal deer kill in Illinois. He traveled to Okeene, OK for twenty-five years and hunted rattlesnakes. Joe had many achievements in his life but his family was his biggest accomplishment. His children and grandchildren were his pride and joy and his legacy will live on through them. Joe touched the lives of many and will be lovingly remembered. Memorials in his honor may be made St. Jude’s Children’s Research Hospital, 262 Danny Thomas Place, Memphis, TN 38105. Please visit www.mitchell-jerdan.com or www.facebook.com/mitchelljerdanfuneralhome to light a virtual candle in his honor or share a memory with the family.

The family of Joe Allen Fasig created this Life Tributes page to make it easy to share your memories.

Send flowers to the Fasig family.