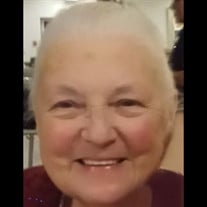 Jewell Leslie Gilbert, age 72 of Mattoon, IL passed away at 4:39 AM, Monday, January 3, 2022, at Sarah Bush Lincoln Health Center in Mattoon, IL. A funeral service in her honor will be held at 1:00 PM, Monday, January 10, 2022, at Mitchell-Jerdan Funeral Home, 1200 Wabash Avenue, Mattoon, IL 61938.Reverend Derold Doughty will officiate with the assistance of Reverend Duane Pope. The visitation will be held from 11:00 AM until the time of service at the funeral home. Jewell was born on October 22, 1949, to the late Leslie Earl Dobbs and Lorane ODell (Elliott) Dobbs. She married James W. Morecraft in 1970. She later married Jack B. Gilbert on May 20, 1989, in Mattoon, IL; he preceded her in death on October 19, 2019. She is survived by one son, Ted A. Morecraft of Mattoon, IL: three grandchildren, Neveah L. Morecraft of Mattoon, IL, Ireland K. C. Morecraft of Golden, CO, and Spencer R. Morecraft of Golden, CO. She was preceded in death by one sister, Selena R. Griffith. Jewell was an active member of the Apostolic Center Church in Mattoon, IL. A graduate of Mattoon High School, she later earned her Cosmetology Degree from Lake Land College in Mattoon, IL. Skilled in her profession, she owned her own shop in Mattoon, IL for more than thirty years. After retiring she followed her passion of quilting and fabrics and opened her store, Fabrics N More in Mattoon, IL. First and foremost, Jewell loved God. She had an appreciation for nature and wildlife and always made it a priority to take her son camping and fishing. However, her pride and joy were her three grandchildren that she consistently bragged on to convey how proud she was of them. Jewell will be remembered most for her greatest quality, which was unconditional love. Please visit www.mitchell-jerdan.com or www.facebook.com/mitchelljerdanfuneralhome to light a virtual candle in her honor or share a memory with the family.

The family of Jewell Leslie Gilbert created this Life Tributes page to make it easy to share your memories.

Send flowers to the Gilbert family.