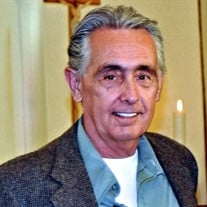 Jesse “Mickey” Coldwell Melton, age 70 of Humboldt, IL passed away Wednesday, March 28, 2018 at Sarah Bush Lincoln Hospital in Mattoon, IL. The funeral service in his honor will be held Thursday evening, April 5, 2018 at 7:00 P.M. at Mitchell-Jerdan Funeral Home, 1200 Wabash Avenue, Mattoon, IL 61938; Pastor Travis Spencer will officiate. Military Rites will be conducted at the funeral home by the Mattoon VFW Post 4325. Burial will be held at a later date. The visitation will be held Thursday evening from 5:00 P.M. until the time of service at the funeral home. Mickey was born on May 1, 1947 in Tuscola, IL the son of Jake and Estelle (Thomas) Melton. He is survived by his children: two daughters; Nicole Adams of Charleston, IL, Dacia Melton of Bloomington, IL; one son, Clayton Shaffer of Jacksonville, IL; six grandchildren, Adam Wren, Benjamen Craig, Lucus McQueen, Madison and McKenzie Shaffer, and Rian Patton; one great-child, Bellamy McQueen; and several nieces and nephews. Mickey is preceded in death by his parents; two sisters, Eldene Diltz and Patricia Wildenradt; two nephews, Dennis Diltz and Michael Wildenradt. Mickey honorably served our country in the Navy during the Vietnam War. He was a carpenter who loved fishing and collecting vehicles. He was an avid animal lover and dedicated family man. Please visit www.mitchell-jerdan.com or www.facebook.com/mitchelljerdanfuneralhome to light a virtual candle in his honor or share a memory with the family.

The family of Jesse "Mickey" Coldwell Melton created this Life Tributes page to make it easy to share your memories.

Send flowers to the Melton family.