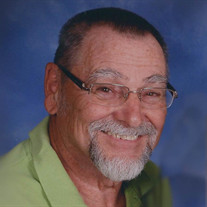 A video tribute in his honor will be posted when available. Please check back. Mattoon, IL – Jerry Dean “J.D.” Haga, age 72, of Mattoon, IL, passed away, at 2:15 p.m., Sunday, January 24, 2016, at his residence. The funeral service in his honor will begin at 11:00 a.m., Wednesday, January 27, 2016, at Mitchell-Jerdan Funeral Home, 1200 Wabash Avenue, Mattoon, IL, 61938. Reverend Travis Spencer will officiate. Visitation will be held at the funeral home from 9:00 a.m. until the service begins. Interment will be in Resthaven Memorial Gardens. Born April 9, 1943, in Cates, IN, J.D. was the son of James A. and Grace B. (Eslinger) Haga. He married Janice E. Belt on July 17, 1985, she survives. He is also survived by his children, Sheila Hutcheson and husband Chris of Neoga, IL, Paula Nettles and husband Jeff of Normal, IL, Dean Haga of Neoga, IL, Jodi Walters of Gardner, IL, Mendi Wallace and husband Bart of Machesney Park, IL, Marc Rogers of Mattoon, IL, and Cindi Sears and husband A.J. of Mattoon, IL ; two sisters, Mary Reardon and Martha Meeks, both of Atwood, IL; fourteen grandchildren, and nine great-grandchildren. He was preceded in death by his parents, three brothers, two sisters, and one step-sister. Mr. Haga served our country with the United States Army as a mechanic. He was former owner and operator of Haga Autobody and had been employed by Rasmussen Chevrolet and Grobelny Motors. J.D. attended The Fields Church, was a life member of the Mattoon VFW and American Legion, and a former member of the Eagles Lodge. He was an avid fan of NASCAR and supporter of Duke Basketball. Restoring Pontiac GTOs was a labor of love for him. J.D. cherished his family and nothing was more fun to him than working jigsaw puzzles with his children and grandchildren and spending time with his family. Memorials in his honor may be made to the American Cancer Society, 2509 S. Neil Street, Champaign, IL 61820. Please visit www.mitchell-jerdan.com or www.facebook.com/mitchelljerdanfuneralhome to light a virtual candle in his honor or share a memory with his family.

The family of "J.D." Jerry Dean Haga created this Life Tributes page to make it easy to share your memories.

A video tribute in his honor will be posted when available. Please...

Send flowers to the Haga family.