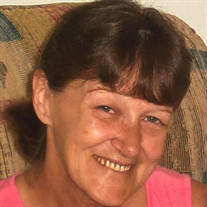 Jean M. (Szachnitowski) Johnson, age 71 of Gays, Il passed away on Wednesday, January 20, 2021 at her residence surrounded by family. A funeral mass in her honor will be celebrated at 10:00 AM, January 28, 2021 at the Immaculate Conception Church,320 N 21st Street, Mattoon, IL 61938. A committal service will be held immediately thereafter at Calvary Cemetery in Mattoon, IL. Mitchell-Jerdan Funeral Home 1200 Wabash Avenue, Mattoon, IL 61938 is in charge of services. Jean was born January 12, 1950 in Mattoon, IL to the late William and Kathleen (Conlin) Szachnitowski. She is survived by one daughter, Rhonda Vickers and husband Donald of Charles Town, WV; four grandchildren: Miles Callow of Canton, IL, Jakeb Callow and wife Savannah of Charleston, IL, Madison and Austin Vickers of Charles Town, WV; one great-granddaughter, Morgan Callow of Mattoon, IL; one great-grandson, Dominic Callow of Charleston, IL; two sisters, Suzanna Sanders and husband Toby of Pana, IL, Linda Kelly and husband Michael of Phoenix, AZ; five brothers: Jerry Szachnitowski and wife Esther of Springfield, IL, Richard Szachnitowski and significant other Deb of Indianapolis, IN, Joseph Szachnitowski of Gays, IL, Bruce Szachnitowski of Windsor, IL, Matthew Szachnitowski and wife Debra of Kokomo, IN; and numerous nieces and nephews. She was preceded in death by her son, Shannon Callow; three brothers; and one nephew. Jean graduated from Windsor High School in 1968. She retired from General Electric in Mattoon, IL, in 2004 after thirty-five dedicated years. She made many wonderful friendships during her time at GE. After retirement, Jean enjoyed keeping active and staying busy by working at Big Lots in Mattoon, IL. Jean was a member of the Immaculate Conception Church in Mattoon, IL. She liked to crochet, boating on Lake Mattoon, and traveling throughout the country. Most of all, Jean cherished making memories with her family and friends. Jean will be greatly missed by all those that loved her. Donations in her honor may be made to the Immaculate Conception Catholic Church. Please visit www.mitchell-jerdan.com or www.facebook.com/mitchelljerdanfuneralhome to light a virtual candle in her honor or share a memory with the family.

Jean M. (Szachnitowski) Johnson, age 71 of Gays, Il passed away on Wednesday, January 20, 2021 at her residence surrounded by family. A funeral mass in her honor will be celebrated at 10:00 AM, January 28, 2021 at the Immaculate Conception... View Obituary & Service Information

The family of Jean M. Johnson created this Life Tributes page to make it easy to share your memories.

Send flowers to the Johnson family.