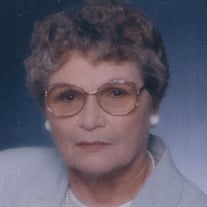 Humboldt, IL – Jean K. Gammill, age 96, of Humbolt, IL, passed away at 3:55 p.m., Monday, February 13, 2017, at the Odd Fellow-Rebekah Home in Mattoon, IL. The funeral service in her honor will begin at 11:00 a.m., Thursday, February 16, 2017, at Mitchell-Jerdan Funeral Home, 1200 Wabash Avenue, Mattoon, IL, 61938. Pastor Dennis Strawn will officiate. Interment will follow in Dodge Grove Cemetery. Visitation will be held at the funeral home from 10:00 a.m., until the service begins. Born December 4, 1920, Jean was the daughter of William I. and Elizabeth M. (Batty) Lash. She married Elsworth H. Gammill on February 14, 1961, in Mattoon, IL. He passed away on August 25, 1976. She is survived by several nieces and nephews. In addition to her husband, she was preceded in death by her parents, two brothers, and four sisters. Jean served our country with the United States Army during World War II. She had earned her Registered Nursing degree from Peoria Methodist Hospital. After returning from the war, she continued her nursing career for a period of time. She then worked in Dr. Podesta’s dental office for many years before deciding to continue her education. After earning her bachelor’s degree at Lake Land College and Eastern Illinois University, she became an instructor at Lake Land College in Dental Hygiene Radiology until retiring. She had been an active member of the First Baptist Church of Mattoon. Other memberships included the Order of the Eastern Star and the VFW Post 4325. Memorials in her honor may be made to the First Baptist Church of Mattoon, IL. Please visit www.mitchell-jerdan.com or www.facebook.com/mitchelljerdanfuneralhome to light a virtual candle in her honor or share a memory with her family.

The family of Jean K. Gammill created this Life Tributes page to make it easy to share your memories.

Send flowers to the Gammill family.