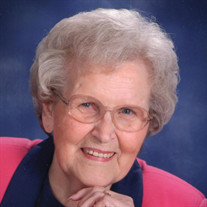 Janice Ellen Brand, age 99 of Mattoon, IL passed away Sunday, November 21, 2021, at Sarah Bush Lincoln Health Center in Mattoon, IL. A funeral Mass in her honor will be held at 10:00 AM, Monday, November 29, 2021, at Immaculate Conception Catholic Church, 320 N. 21st Street, Mattoon, IL 61938. A committal service will immediately follow at Calvary Cemetery in Mattoon, IL. The visitation will be held from 9:00 AM until the time of service at the church. Mitchell-Jerdan Funeral Home located at 1200 Wabash Avenue, Mattoon, IL 61938 is in charge of services. Janice was born on August 3, 1922, in Edgewood, IA to the late Raymond and Ethel (Halfhill) McCune. She married Gerald F. Wilhelm on June 30, 1943, in Cedar Rapids, IA; he preceded her in death on February 5, 1988. She later married Gerhard “George” Brand on April 1, 1991; he preceded her in death on January 26, 2000. She is survived by one son, Dennis Michael Wilhelm and wife Linda of Decatur, IL; one daughter Mary Margaret Magnotta and her husband Christopher of Mattoon, IL; one daughter-in-law, Linda D. Wilhelm of Decatur, IL; eight grandchildren and many precious great-grandchildren. She was preceded in death by two sons, Gerald Thomas Wilhelm and Phillip Raymond Wilhelm; one brother, Jerry McCune; one grandson, Jeffery Wilhelm. She had four sisters, Pauline, Carol, Beverly and Ethel. Janice was a faithful member of the Immaculate Conception Catholic Church in Mattoon, IL, where she served as a member of the Daughters of Isabella and belonged to the Quilters Club for more than twenty years. Throughout her lifetime she was employed at General Electric, Douglas Healthcare Center, and Neighborhood Grocery Store all in Mattoon, IL. Janice enjoyed gardening, photography, baking her delicious apple pies and making Christmas cookies with her family. Spending time with her loved ones, especially her grandchildren and having long talks at the kitchen table with her children were moments that were treasured by all. She will be remembered as a kind, caring, fun, and loving person with a calming demeanor. Her family will deeply miss the woman who was always there to encourage them. Please visit www.mitchell-jerdan.com or www.facebook.com/mitchelljerdanfuneralhome to light a virtual candle in her honor or share a memory with the family.

The family of Janice Ellen Brand created this Life Tributes page to make it easy to share your memories.

Send flowers to the Brand family.