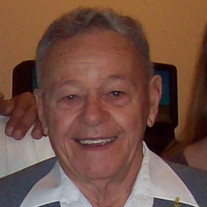 James “Jim” W. Whetsell, age 94 of Mattoon, IL passed away at 5:20 AM, Friday, March 20, 2020 at Odd-Fellow Rebekah Home in Mattoon, IL. A private burial will take place on Wednesday, March 25, 2020 in Dodge Grove Cemetery. A memorial service will take place at a later date. Mitchell-Jerdan Funeral Home, 1200 Wabash Avenue, Mattoon, IL 61938 is assisting the family with arrangements. Jim was born on June 11, 1925 in Mattoon, IL the son of the late Lewis J. and Minnie A. (Strong) Whetsell. He married Thelma L. McKenzie on December 30, 1944 in Mattoon; she preceded him in death on February 3, 2019. He is survived by three sons; Tony D. Whetsell of Taylorville, IL, Shawn M. Whetsell and wife Sandy of Sullivan, IL, Matt L. Whetsell and wife Jamie of Silver City, NM; one daughter, Kayla L. Grissom and husband Fred of Mattoon, IL; nine grandchildren; ten great-grandchildren; and one great-great grandchild. Jim is preceded in death by four brothers and two sisters. Jim honorably served our country in the U.S. Navy on an LST during WWII. He was employed by Roy Eaton Plumbing and Heating and a member of the UA Local 149 Plumbers and Pipefitters. As a lifelong member of First Christian Church in Mattoon, Jim was a person of faith and lived his life serving others. He was one of the original figures in the opening of Mattoon Community Food Center. There was nothing more Jim enjoyed than traveling the world with his beloved wife, Thelma. He wanted to show her the beautiful places he had seen during his time in the Navy. Even in their later years at the age of eighty, Jim and Thelma still had their zest for life and drove to Niagara Falls for one of their last trips. Jim was committed to his faith, family, and friends. He left a lasting memory on many and will be fondly remembered. Memorials in his honor may be made to Mattoon Community Food Center, 600 Moultrie Avenue, Mattoon, IL 61938. Please visit www.mitchelljerdan.com or www.facebook.com/mitchelljerdanfuneralhome to light a virtual candle in his honor or share a memory with family.

The family of James W. Whetsell created this Life Tributes page to make it easy to share your memories.

Send flowers to the Whetsell family.