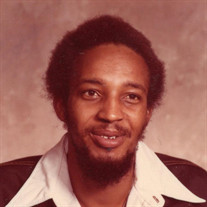 James “Jim” Trimble Jr., age 68 of Mattoon, IL passed away at 8:55 PM, Wednesday, November 24, 2021, at Accolade Healthcare in Pontiac, IL. A funeral service in his honor will be held at 12:00 PM, Saturday, December 4, 2021, at Second Missionary Baptist Church, 20 Old State Road, Mattoon, IL 61938. Pastor Earl Matthews will officiate. A committal service will immediately follow at Dodge Grove Cemetery in Mattoon, IL. The visitation will be held from 10:00 AM until the time of service at the church. Mitchell-Jerdan Funeral Home, 1200 Wabash Avenue, Mattoon, IL 61938 is in charge of services. Jim was born on August 18, 1953, to James Sr. and Bettie R. (Butler) Trimble. He married Mildred “Micki” Spier on February 14, 1998, in Mattoon, IL; she survives and resides in Mattoon, IL. He is also survived by his mother; one stepdaughter, Jennifer Smith of Mattoon, IL; one brother, Vincent Trimble of Charleston, IL; one sister Malia McGee of Charleston, IL; eleven nieces and nephews: Nicholas Trimble, Natalie Trimble, Kevin Trimble, Shawna Trimble, Kenneth Burnett, Maika Turner, Marquita Vaughn, Meeka McGee, Ta’ler Trimble, Kenny Trimble, and Quinten Trimble. He was preceded in death by his father, and three brothers, Kenneth E. Trimble, Hubert S. Trimble, and Kevin L. Trimble. Jim was a faithful member of the Second Missionary Baptist Church in Mattoon, IL where he served as an usher. He was employed at General Electric in Mattoon, IL and later worked as custodian at Mattoon Manor Nursing Home in Mattoon, IL. An avid sports fan, Jim primarily appreciated attending, and watching baseball and basketball sporting events. Riding his bicycle was an activity that Jim spent countless hours enjoying. Jim was a man who adored his family and was particularly close to his mother. He will be greatly missed by his family, friends, and by all who knew and loved him. A memorial tribute in his honor may be made to his mother, Bettie Butler, in care of Mitchell-Jerdan Funeral Home. Please visit www.mitchell-jerdan.com or www.facebook.com/mitchelljerdanfuneralhome to light a candle in his honor or share a memory with the family.

The family of James "Jim" Trimble Jr. created this Life Tributes page to make it easy to share your memories.

Send flowers to the Trimble family.