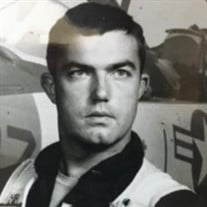 James Francis “Frank” Sullivan, age 78 formerly of Humboldt, IL passed away on Monday, December 7, 2020, at Veterans Community Living Center in Rifle, CO. A graveside service in his honor will be held at 11:00 AM, Friday, June 25, 2021 at Calvary Cemetery in Mattoon, IL. Military Rites will be conducted by VFW Post 4325 and Marine Corp Funeral Honors. Mitchell-Jerdan Funeral Home located at 1200 Wabash Avenue, Mattoon, IL 61938 is in charge of services. If you would like to visit with family members, a Celebration of Life will be held from 12:00 PM to 3:00 PM at the Immaculate Conception Parish Center, 1920 Richmond Avenue, Mattoon, IL. Frank was born on August 19, 1942, in Terre Haute, Indiana to the late Charles and Mary (Holmes) Sullivan. He is survived by his loving wife of thirty-seven years, Carol; two sons, Scott England-Sullivan and wife Marla, Greg Sullivan and wife Susanne; one daughter, Rachel Kendzior and husband John; one stepdaughter, Kristi Redlinger and husband Edward; twelve grandchildren, Catherine, Christian, Caitlyn, Caelen, Macy, Caden, Sadie, Steven, Spencer, Kai, Chase and Lucy, and 5 great-grandchildren that he sadly did not know due to Alzheimer’s; three brothers, Tim Sullivan and wife Rebecca, Mike Sullivan and wife Linda, Dan Sullivan and wife Priscilla; three sisters, Mary Alice Ames, Jody Sniff and husband Don, Anna Cook and husband Gary, sisters-in-law, Dixie Parks and husband Larry, Paris Walker and partner Darrin Collins; one brother-in-law Charlie Walker and partner Kathy Boswell. He was preceded in death by two brothers, Pat and John L. Sullivan, two brothers-in-law Roger Ames and Don Hammon; one sister-in-law Becky Sullivan. His beloved dogs Merfi and Apollo were the light in his Alzheimer’s journey. Frank was raised on a farm east of Humboldt; graduated from Mattoon High School in 1960 and Indiana State University with a bachelor’s degree in Economics. Frank served during the Vietnam era as a Fighter Pilot Instructor with the US Marine Corp, training other pilots “dog fighting” skills. Later in life, his gift of never knowing a stranger served him well in his work of selling/leasing large cranes throughout the Southeast part of the United States. Frank’s family expresses its deepest gratitude to the doctors, nurses and staff who lovingly cared for and about Frank during his long battle with Alzheimer’s. They are true American Heroes who risked their lives and their families’ lives during the COVID pandemic to care for America’s Military Heroes. In Frank’s honor, the family requests that you volunteer your time or donate to your local community charities, organizations, and churches of your choice. Please visit www.mitchell-jerdan.com or www.facebook.com/mitchelljerdanfuneralhome to light a virtual candle in his honor or share a memory with the family.

James Francis &#8220;Frank&#8221; Sullivan, age 78 formerly of Humboldt, IL passed away on Monday, December 7, 2020, at Veterans Community Living Center in Rifle, CO. A graveside service in his honor will be held at 11:00 AM, Friday, June... View Obituary & Service Information

The family of James Francis "Frank" Sullivan created this Life Tributes page to make it easy to share your memories.

Send flowers to the Sullivan family.