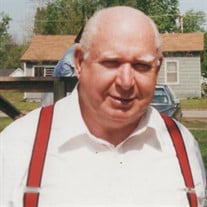 James W. Sneed, age 84 of Mattoon, IL passed away at 10:58 AM Friday, October 30, 2020 at Mattoon Rehabilitation and Health Care Center in Mattoon, IL. A funeral Service in his honor will take place at 10:00 AM Friday, November 13, 2020 at Herrin City Cemetery in Herrin, IL. Pastor Wayne Gardner will officiate. Mitchell-Jerdan Funeral Home, 1200 Wabash Avenue, Mattoon, IL 61938 is in charge of services. James was born on March 24, 1936 in Sesser, IL to the late Glenn Jason Sneed and Clara Agnes Simpson. He married Wanda Marie Baxter in Carbondale, IL; she preceded him in death December 21, 2011. He later married Bessie Lou Anderson; she preceded him in death August 29, 2018. He is survived by five sons, Dennis Sneed and wife Vickie of Mattoon, IL, James Sneed and wife Dixie of Long Beach, CA, Steve Sneed of West Frankfort, IL, Vince Sneed of West Frankfort, IL, Curtis Sneed and wife Sylvia, of West Frankfort, IL; one brother Clifford Sneed and wife Sherry of Cookeville, TN; one sister, Jesse Moore and husband Allen of Cookeville, TN; and eleven grandchildren. He was preceded in death by one brother, Charles Sneed and two sisters, Ruth Byler and Velma Wolf. A follower of Jesus Christ, James answered His call to become an evangelist; sharing his love of the Gospel, James was a pastor at Bible Way Crusade Church in Royalton, IL; and preached on WSIU Public Broadcasting. A man with many skills, James was often referred to as a “jack of all trades”. Some of the positions he held was a painter, owner of the Campus Shoe Clinic in Carbondale, IL, maintenance man, and security guard. While James is basking in the presence of his Lord and Savior, he will be lovingly remembered by his family and friends. Please visit www.mitchell-jerdan.com or www.facebook.com/mitchelljerdanfuneralhome to light a virtual candle in his honor or share a memory with the family.

The family of James W. Sneed created this Life Tributes page to make it easy to share your memories.

Send flowers to the Sneed family.