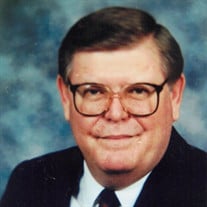 James Michael Rominger, age 83 of Mattoon, IL passed away at 2:15 PM, Wednesday, September 2, 2020 at Odd-Fellow Rebekah Home. A graveside service in his honor will be held at 10:00 AM, Wednesday, September 9, 2020 at Dodge Grove Cemetery in Mattoon, IL; Pastor Josh Butler will officiate. Military Rites will be conducted by the Mattoon VFW Post 4325. Mitchell-Jerdan Funeral Home, located at 1200 Wabash Avenue, Mattoon, IL 61938 is charge of services. James was born on December 27, 1936 at their family farm, northeast of Mattoon, IL to the late Cleone M. and Mildred F. (Lilly) Rominger. He is survived by one son, David M. Rominger of Mattoon, IL; one daughter, Jennifer B. Rominger of Mattoon, IL; four grandchildren: Zachary M. Rominger of Effingham, IL; Connor J. Rominger of Logansport, IN; Trevor J. Cothern of Charleston, IL; Kelly M. Cothern of Mattoon, IL; and one sister, Janet Seelow and husband George if Garden City, MI. He is preceded in death by his daughter-in-law, Rachael Rominger. James honorably served our country as a Corporal in the United States Army from 1962 until 1964 during the Cuban Missile Crisis. He later worked as the produce manager for Eisner/Jewel Osco in Mattoon, IL. After his retirement in 1983, James actively spent his time serving as the President and Treasurer of Flora Rotary Club, President of Friends of the Library, President of The Civil War Council and member of the Round Table of Clay County. Throughout his life, James was a curious and humorous man. He was heavily involved in studying world religions and attended Theology school in Bethel, NY. He was an avid reader, an award-winning gardener, lover of Western movies, and attending live country music festivals. A humble man, James had many accomplishments in his life; however, he proudly boasted upon his children and grandchildren, his greatest achievements. Memorials in his honor may be made to Veterans of Foreign Wars (VFW), 1220 S. 19th Street, Mattoon, IL 61938. Please visit www.mitchell-jerdan.com or www.facebook.com/mitchelljerdanfuneralhome to light a virtual candle in his honor or share a memory with the family.

The family of James Michael Rominger created this Life Tributes page to make it easy to share your memories.

James Michael Rominger, age 83 of Mattoon, IL passed away at...

Send flowers to the Rominger family.