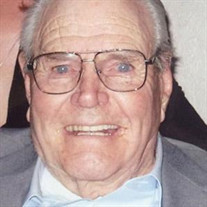 Mattoon, IL - James Erastus “Jim” McBride, age 103, of Mattoon, IL, passed away at 5:25 p.m., Saturday, August 15, 2015, at his residence. The funeral service in his honor will begin at 2:00 p.m., Friday, August 21, 2015, at Mitchell-Jerdan Funeral Home, 1200 Wabash Avenue, Mattoon, IL 61938 with Reverend Robert Clark officiating. Interment will follow in Dodge Grove Cemetery. Visitation will be held at the funeral home from 12:00 p.m., until the service begins. Jim was born in Millstadt, Illinois March 1, 1912 to Thomas McBride and Effie (Gossett) McBride. In 1935, Jim married Helen Jane Elliott. They were married and worked together for 50 years until Helen died in 1986. Jim is survived by his three children, John Edward McBride of St. Louis, MO; Joann Effie McBride of Tucson, AZ; and Janet Elizabeth McBride of San Diego, CA. He is survived by two grandchildren James Elliott McBride of Mattoon, Illinois and Marisa Kathryn (and Doug) Overton of Mattoon, IL and by three great-grandchildren: Phillip Thomas McBride, Tucker Douglas Overton, and Macy Paige Overton. Ralph McBride, Jim’s only brother was four years older and preceded him in death in 1966. Jim’s second wife, Edith “Cathy” Squires preceded him in death in 2003. Jim grew up living and working on his parents’ farm near Millstadt, Illinois and his grandparents’ farm near Cairo, Illinois. Jim was an entrepreneur throughout his life. As a teen-ager, he began a milk route and started what became the McBride Dairy in Millstadt, IL, a business that his father, Tom McBride, continued into the 1950’s. Jim worked on the Mississippi River barges in the 1930’s. Besides farming, he began a trucking business in the 1930’s with one truck and soon thereafter purchased more trucks and hauled cattle, grain and cotton. After Jim and Helen were married they soon took over the Gossett farm and expanded it by buying other farms. He also operated a service station and was a bulk fuel-oil and gasoline distributor. At the Cairo airport Jim and Helen developed the love of flying and became licensed pilots. In the mid 1940’s they moved to Mattoon, Illinois where they purchased a farm that also included the Mattoon airport. Jim farmed and operated the airport and was a flight-instructor in the late 1940’s. He developed the airport and created a flying school in Mattoon and at one time owned fourteen airplanes and had over a hundred student pilots, most of which were on the GI-Bill after World War II. Jim also had a crop-dusting business and a chemical sales business while he operated the airport. For a few years, Jim developed oil-well drilling in the central Illinois area. In the 1930’s and 1940’s both Jim and Helen McBride were active pilots in the Aircraft Owners and Pilots Association (AOPA) and other pilot organizations. In 1950 the Coles County municipal airport was built and Jim and Helen McBride re-entered the trucking business and purchased a small interstate trucking company and changed the name to McBride’s Express, Inc. The company operated in Southern Illinois and St. Louis, MO. The company grew and served the business community as a family business. They sold it in 1978 to Chromalloy-American Co. Jim continued to work part time with the company for another five years however his main love had become the game of golf. In 1972 Jim McBride and Burnham Neal organized a group of investors and purchased a farm adjacent to the Mattoon Golf and Country Club. They developed Mattoon Estates and developed the golf club into an eighteen-hole course. Jim originally became a member of the Mattoon Golf and Country Club in 1955 and has also been a member of the Skyline Golf and Country Club in Tucson, AZ for over thirty years. Jim is presently a life member of the Tucson 49ers golf club. In February 2006 at age 93, Jim won the Cumquat Golf Outing in Sarasota Florida where he was awarded the winning trophy for the lowest score. At age 100, Jim received a “Key-To-The-City” of Mattoon awarded by Mayor Tim Gover. Besides living to age 103, probably one of the more unusual accomplishments of Jim McBride was that as a golfer, he had eleven “hole-in-one” golf shots, three of them at the Mattoon Golf and Country Club and one each at Biloxi, MS, Decatur, IL, Lake of the Ozarks, MO, French Lick, IN, Champaign, IL, and Elgin AFB. He participated in hundreds of golf events and won countless golf awards. Below is a list of his Hole-In-One awards. Year Hole Golf Course 1 1968 #7 Mattoon Golf & Country Club (when a 9 hole course) 2 1969 #6 Biloxi, Mississippi 3 1971 #10 Skyline Golf & CC, Tucson, AZ 4 1971 #17 Southside Country Club, Decatur, IL 5 1980 #14 Dogwood Golf Course, Lake of the Ozarks, MO 6 1982 #5 French Lick Resort, French Lick, Indiana 7 1984 #16 Mattoon Golf & Country Club 8 1988 #12 Illini Golf Club, Springfield, Illinois 9 1990 #17 Eglin Air Force Base 10 1991 #6 Mattoon Golf & Country Club 11 1992 #13 Ventana Canyon Country Club Jim was active in many organizations including the Masonic Temple, the Kiwanis and Toastmasters. For decades he was active in the trucking industry including the American Trucking Association, the ATA-Regional Carriers Conference, the Traffic Club of St. Louis, The Traffic Club of Decatur, Delta Nu Alpha Transportation Fraternity and other related industry organizations. Please visit www.mitchell-jerdan.com or www.facebook.com/mitchelljerdanfuneralhome to light a virtual candle in his honor or share a memory with his family.

The family of James E. McBride created this Life Tributes page to make it easy to share your memories.

Send flowers to the McBride family.