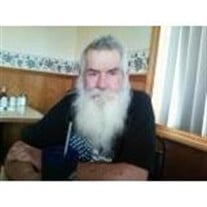 Charleston, Illinois-James A. Mahlmeister, 75, of Charleston, passed away at 11:26 a.m., Saturday, May 11, 2013 in Carle Hospital, Urbana, Illinois.\r\n\r\nThe funeral service honoring his life will begin held at 12:00 noon Thursday, May 16, 2013 at the Apostolic Center Church, 205 Country Club Road, Mattoon, IL. Reverend Darold Doughty and Reverend Shine Doughty are officiating. Interment will take place in Ashmore Cemetery, Ashmore, IL. Visitation will be from 10:00 a.m. until the time of services at 12:00 noon, also in the Apostolic Center Church. The family is being served by Mitchell-Jerdan Funeral Home, 1200 Wabash Avenue, Mattoon, IL. \r\n\r\nMr. Mahlmeister was born on May 9, 1938, in Buffalo, New York, the son of Francis and Catherine (Kramer) Mahlmeister. He married Grace Ethington on October 1, 1966 in Marysville, IL. She survives. \r\n\r\nAlong with his loving wife Grace, of 47 years, he is survived by their three children: Lisa Stone and her husband Clint, of Camisano, Italy; John Mahlmeister of Mattoon, IL; Charles Mahlmeister and his wife Lynn, of Casey, IL; one sister, Patricia A. Page, of Kamiah, ID; nine grandchildren: Samantha, Dakota, Dylan, and Sierra, all of Camisano, Italy; Emily and Abbie of Waldron, AK; Katherine and Matteson of Mattoon, IL, and Destinee of Casey, IL. \r\n\r\nHe was preceded in death by his parents, Francis and Catherine Mahlmeister, and one brother, Charles Mahlmeister. \r\n\r\nJim served his country proudly in the United States Air Force, servicing for over 11 years. He was a member of the Apostolic Center Church in Mattoon, Illinois. He was also a member of the Charleston American Legion. He enjoyed using his hands for a living in construction, specializing in laying new flooring. In his spare time, Jim and his wife loved taking trips together. He was famous among his family and friends for baking, particularly for fudge and cookies Grace and he would make during Christmas time. He especially treasured the time he spent with his children and his grandchildren, and he will be dearly missed by all who knew him.\r\n\r\nIn lieu of flowers, his family has suggested donations in his honor to: Illinois AMVETS, 2200 South Sixth St., Springfield, IL 62703; Shop With A Cop, Mattoon Police Department, 1710 Wabash Avenue, Mattoon, IL 61938; or Mr. Mahlmeister's Family. \r\n\r\nTo share a memory with his family, or light a candle in his honor, please visit: www.mitchell-jerdan.com or www.Facebook.com/Mitchell-JerdanFuneralHome.\r\n

Charleston, Illinois-James A. Mahlmeister, 75, of Charleston, passed away at 11:26 a.m., Saturday, May 11, 2013 in Carle Hospital, Urbana, Illinois.\r\n\r\nThe funeral service honoring his life will begin held at 12:00 noon Thursday, May 16,... View Obituary & Service Information

The family of James A. Mahlmeister created this Life Tributes page to make it easy to share your memories.

Send flowers to the Mahlmeister family.