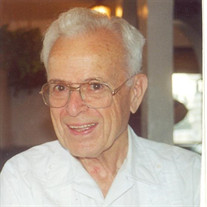 MATTOON, IL-James L. Leming, age 94, of Mattoon, IL, passed away at 8:35 P.M., on Friday, September 2, 2016, at Mattoon Rehabilitation and Health Care Center. Funeral services celebrating his life will begin at 12 noon, September 7, 2016, at Mitchell-Jerdan Funeral Home, 1200 Wabash Ave., Mattoon, IL 61938, with Reverend Dr. John Connett officiating. Interment will take place at 4:00 P.M. in Percy Village Cemetery, Percy, IL. Visitation will be held Wednesday, September 7, 2016 from 10:00 A.M. until time of service at Mitchell-Jerdan Funeral Home, Mattoon, IL. Mr. Leming was born October 24, 1921, in Randolph County, IL, the son of Charles Colin and Viola Mae (Welch) Leming. He married Verna Mae Billingsley on May 24, 1941 in Cape Girardeau, MO. She passed away May 13, 2009. Survivors include his children; David L. Leming and his wife Carla of Mattoon, IL, Nancee L. Gerould of Mattoon, IL and James Phillip Leming and his wife Kim of Edmond, OK; a daughter in law, Paula (Swickard) Leming of Rio Rancho, NM; one sister, Ada Mae Halligan of Indianapolis, IN; five grandchildren, Sarah Kathryn Leming of Bernalillo, NM, Luke Gerould and his wife Heather of Mattoon, IL, Isaac Gerould and his wife Cathy of Mattoon, IL, Amy Parker and her husband Ryan of Oklahoma city, OK and Emily Leming of Norman, OK; two great-grandchildren, Kennidi Gerould of Mattoon, IL and Kaden Whitley of Charleston, IL. He was preceded in death by his parents; one son, Dr. Charles W. Leming; one daughter Alice Ann Leming; one brother, Paul Leming; and one sister, Marjorie McCarthy. James received a Bachelor’s degree from Southern Illinois University and a Master’s degree from the University of Illinois both in Agriculture. He was a retired Manager of Coles Moultrie Electric in Mattoon, IL and a member of the East Side Church of the Nazarene in Mattoon, IL. Mr. Leming served in the U.S. Navy during WWII as a radio technician in occupied Japan. After serving in the Navy he moved his young family to Neoga, IL where he taught Agriculture. In 1960 He moved to Mattoon, IL and continued teaching Agriculture. He later went to Coles Moultrie Electric in Mattoon, IL working in public relations. His work led him to Dacca, Bangladesh where he worked for the NRECA bringing electricity to rural Bangladesh. He and his wife lived there for seven years allowing them the opportunity to travel the world. James later went to Belize where he was involved in bringing electricity to the rural areas. Beyond his career he was an experienced piano player, performing in numerous venues. He touched people through his music forming friendships of all social, economic, cultural and political status all over the world. James also served as Commissioner on the Mattoon City Council for several years. He was a member of the American Legion, Veterans of foreign Wars and several community and civic organizations in Mattoon, IL. In his pastime he enjoyed Genealogy and other projects requiring research and working hard. Though he is gone, James remains in the hearts and minds of those who loved him most. Memorials may be made to the American Legion and East Side Church of the Nazarene of Mattoon, IL Please visit www.mitchell-jerdan.com or www.facebook.com/mitchelljerdanfuneralhome to light a virtual candle in his honor or share a memory with his family.

The family of James L Leming created this Life Tributes page to make it easy to share your memories.

Send flowers to the Leming family.