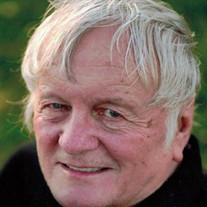 James “Jim” Joseph Worman, age 76 of Mattoon, IL passed away at 6:00 AM, Thursday, June 17, 2021, at his residence surrounded by his family. A funeral mass in his honor will be held at 10:00 AM, Wednesday, June 30, 2021, at Immaculate Conception Catholic Church, 320 N. 21st Street, Mattoon, IL 61938. The visitation will be held one hour prior to the service at the church. Inurnment will take place in St. Isidore Cemetery, 19812 1000th Avenue, Dieterich, IL 62424 at a later date. Mitchell-Jerdan Funeral Home, located at 1200 Wabash Avenue, Mattoon, IL 61938 is in charge of services. Jim was born on May 7, 1945, in Bishop Township, IL in Effingham County to the late Leo J. and Eleanora E. (Habing) Worman. On May 29, 1971, he married the love of his life, Joyce A. Ard. He is survived by his wife of fifty years, Joyce Worman of Mattoon, IL; six children: James J. Worman of Chicago, IL, Shannon L. Worman and partner Sean Harper of Surprise, AZ, Elizabeth A. Worman-Osley of Mattoon, IL, Charles A., Phillip J., and Anna Y. Osley of Mattoon, IL; three grandchildren, Ashley Worman of Surprise, AZ, Alexis Harper of Surprise, AZ, Devon Ferguson of Phoenix, AZ; one great-grandchild, Anylah Calhoun of Surprise, AZ; three brothers, Gerald “Jerry” Worman and wife Ann of Effingham, IL, Dale Worman and wife Kathy of Teutopolis, IL, Patrick Worman of Teutopolis, IL; five sisters, Barbara Kremer of Teutopolis, IL, Norma Bloemer and husband Oscar of Effingham, IL, Carol Bosley and husband Terry of Champaign, IL, Linda Koester of Teutopolis, IL, and Julie Seaton of Teutopolis. He is preceded in death by one sister, Lucille Worman: three brothers-in-law, Robert Kremer, Dennis Koester, and Randy Seaton. Jim operated as a medical corpsman in the Navy from 1966 until 1969 and served in the Vietnam War from 1968 until 1969 with the 1st Battalion 26th Marines. During that time, he received many decorations, medal, badges, commendations, citations, and campaign ribbons awarded or authorized, obtaining National Defense Service Medal, Vietnam Service Medal with Bronze Star, Fleet Battalion Action Ribbon, and Navy Achievement Medal. Jim attended Eastern Illinois University in Charleston, IL and achieved his bachelor’s degree in Accounting and master’s degree in Business Administration in four years, later becoming a Certified Public Accountant. He and his family lived in St. Marie, IL for several years, where he was actively involved in the community, the church, and his children’s activities. The family later moved to Arizona, Jim was employed by the State Department of Education as an accountant in budgeting and forecasting. After his retirement, Jim and Joyce moved back to Mattoon, IL to spend time with their loved ones. He will be greatly missed and fondly remembered. Memorials in Jim’s honor may be made to American Cancer Society, 675 E. Linton Avenue, Springfield, IL 62703. Please visit www.mitchelljerdan.com or www.facebook.com/mitchelljerdanfuneralhome to light a virtual candle in his honor or share a memory with the family.

The family of James "Jim" J. Worman created this Life Tributes page to make it easy to share your memories.

Send flowers to the Worman family.