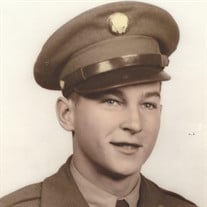 James F. Cobb, age 86 of Mattoon, IL passed at 9:17 A.M., Tuesday, March 12, 2019 at Sarah Bush Lincoln Health Center in Mattoon, IL. Funeral services will be held at a later date. Mitchell-Jerdan Funeral Home is assisting the family with arrangements. James was born on October 15, 1932 in Cooks Mills to the late Howard and Frances (Phelps) Cobb. He married Mary C. Hoover on December 19, 1989 in Waverly, TN. He is survived by his wife Mary Cobb of Mattoon, IL; four children Ricky Gene Cobb, Deborah Sue, Francis Elaine, and Barbara Christine; two brothers, Kenneth Cobb and wife Janice of Mattoon, IL, Marvin Cobb and wife Sharon of Altamont Springs, FL; two sisters, Nancy Wortham of Lerna, IL and Joyce Cobb of Mattoon, IL. He is preceded in death by one son, two brothers, and one sister. James honorably served our country in the army during the Korean Conflict. He was a member of the New Life Tabernacle Church. He was previously employed by Yellow Freight and retired from Howell Asphalt in Mattoon, IL. He was a former member of The VFW and American Legion in Mattoon, IL. He loved traveling and spending time with loved ones. Please visit www.mitchelljerdan.com or www.facebook.com/mitchelljerdanfuneralhome to light a virtual candle in his honor or share a memory with the family.

The family of James F. Cobb created this Life Tributes page to make it easy to share your memories.

Send flowers to the Cobb family.