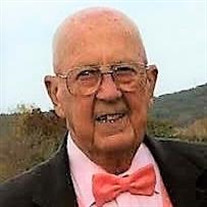 James C. “Boomer” Bain, age 85, passed away November 1, 2017, at his home in Bonita Springs, FL, at 8:55 A.M. A memorial service in his honor will be held Friday, November 17, 2017, at 1:00 P.M. at Mitchell-Jerdan Funeral Home, located at 1200 Wabash Avenue, Mattoon, IL 61938. Pastor Kelly Brady will be officiating. The visitation will be from 11:00 A.M. until the time of service begins at the funeral home. Boomer was born January 27, 1932 in Puxico, MO, the son of Lester Franklin, Sr. and Ruby (Dailey) Bain. He was married to Carla Howard; she survives. He is survived by his children; two sons, Bradley C. Bain and wife Debbie of Florissant, MO, and Barry D. Bain and wife LeAnne of Wheaton, IL; one daughter, Janice L. Rushing and husband Tim of Edwardsville, IL; mother of his children, Norma F. Born; seven grandchildren, Heather Young and husband John, Nathan Bain and wife Gina, Rob Wamhoff, Kelsey Bain, Gibson Capua and husband Bobby, Winston Bain, and Ashlynn McQuiggan and husband Phillip; ten great-grandchildren; one brother, David Bain of San Francisco, CA; one sister, Kay Jones and husband Gary of Scott City, MO. He is preceded in death by his parents; his wife, Patricia Bain; one brother, Frank Bain; one sister, Becky Woolverton; and one grandchild, Evan Rushing. Boomer honorably served our country in the Navy during the Cuba Conflict from 1952 to 1953. He attended the First Presbyterian Church of Mattoon, IL, for many years. He was member of the Mattoon Golf and Country Club, Mattoon Rotary Club, and Mortgage Bankers Association. Boomer enjoyed sharing his experiences and stories, playing golf, camping, traveling, and trout fishing. He was employed by Mercantile Bank in Decatur, IL, and later of Mattoon Federal Savings and Loan as a mortgage banker. However, while working full-time in the banking industry he decided to find a part-time job that lead to his booming career as a basketball official. He started with small local leagues and church groups but quickly rose in rank to be the Missouri Valley Supervisor of Officials. He also officiated in Division I NCAA conferences and tournaments, five Final Four Championship games, multiple international tournaments and world games, and the 1972 Olympics in Munich, Germany. He was elected to the FIBA Hall of Fame among many other national and regional sports hall of fames and actively involved with NJCAA post season tournament. With these many accomplishments, he often spoke of the time he played minor league baseball in the New York Yankee’s farm league with the great Mickey Mantle. Boomer’s young soul, kind hearted nature, and outgoing personality left a lasting effect on those fortunate to have known him. His legacy will live on through this family, friends, and peers. He will be forever missed but not forgotten. Memorials in his honor may be made to the American Heart Association, 2141 W. White Oaks Drive #A, Springfield, IL, 62704. Please visit www.mitchell-jerdan.com or www.facebook.com/mitchelljerdanfuneralhome to light a virtual candle in his honor or share a memory with the family.

The family of Boomer Bain created this Life Tributes page to make it easy to share your memories.

Send flowers to the Bain family.