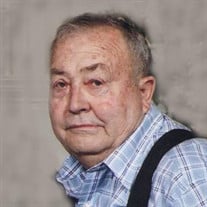 Jackie “Jack” Lee Pinkston, age 86 of Mattoon, IL passed away Thursday, April 14, 2022, at his residence in Mattoon, IL. A graveside service in his honor will be held at 11:00 AM Eastern Time, Thursday, April 21, 2022, at Center Ridge Cemetery, 704 West Johnson Street, Sullivan, IN 47882; Tom Pinkston will officiate. Mitchell-Jerdan Funeral Home located at 1200 Wabash Avenue, Mattoon, IL 61938 is in charge of services. Jack was born February 20, 1936, to the late Paul and Lorene (Bradbury) Pinkston. He married Donna Jean Heistand on July 19, 1954, in Patoka, IN; she preceded him in death on May 2, 2015. He is survived by four children: Michael Pinkston of Humboldt, IL, Tom Pinkston and wife Kim of Princeton, IN, Lori Santrock and significant other Jim Lay of Mattoon, IL, Les Pinkston of Mattoon, IL; one brother; two sisters; four grandchildren: Kamisha Santrock, Larry Santrock and fiancée Tabby, Chelsea Harper and fiancé Justin Graham, and Brent Pinkston and wife Olivia; seven great-grandchildren: Alex Santrock, Jayden Santrock, Luke, Owen, Joel, and Hank Pinkston, Paxton Harper: great-great grandchild, Ella Rae Lynn Graham. He was preceded in death by one sister. Jack was a proud veteran of the United States Marine Corps and honorably served in the Korean Conflict. As a hardworking man, Jack was employed at Meadow Gold Dairy of Mattoon, IL where he retired after many dedicated years of service. Family was his highest priority, always being present in the lives of his children and grandchildren as a mentor and encourager. He enjoyed watching Westerns and detective shows on television. Jack will be sadly missed and fondly remembered by all. Please visit www.mitchell-jerdan.com or www.facebook.com/mitchelljerdanfuenralhome to light a virtual candle in his honor or share a memory with the family.

The family of Jackie "Jack" Lee Pinkston created this Life Tributes page to make it easy to share your memories.

Send flowers to the Pinkston family.