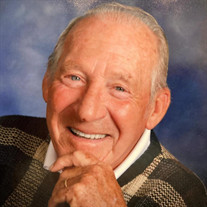 Jack D. Herren, age 83 of Mattoon, IL passed away at 3:41 AM, Tuesday, October 19, 2021, at Sarah Bush Lincoln Health Center in Mattoon, IL. A visitation will be held from 5:00 PM to 7:00 PM, Wednesday, October 27, 2021, at Mitchell-Jerdan Funeral Home, 1200 Wabash Avenue, Mattoon, IL 61938. Reverend Richard Eident will close the visitation with a prayer service at 7:00 PM. A celebration of life service for friends and family will be held at a later date. Jack was born on April 1, 1938, in Marion, IL to the late Paul and Catherine (Moore) Herren. He married Sandy (Deaton) on September 11, 1960, in Marion, IL; she survives. He is also survived by one daughter, LeAnn Herren of San Antonio, TX. Jack was a proud veteran of the US Army. He earned a bachelor’s degree from Southern Illinois University in Carbondale, IL. He joined CIPS in 1962 as a lighting engineer in the Marion, IL office before spending twenty-five years in the Springfield, IL general office and finally accepting the Mattoon, IL Eastern Division Manager position in 1990 where he retired in 1998. During his career he made lasting friendships and touched the lives of many. He was a faithful member of the First Christian Church in Mattoon, IL where he acted as trustee. He also held a membership at the Mattoon Golf and Country Club in Mattoon, IL and enjoyed playing a game of golf up to five times each week if the weather permitted. Community was important to Jack as he served on the Chamber of Commerce and volunteered his time and services at the Food Bank in Mattoon, IL. His greatest love and devotion were to his family. He was blessed to be married to his loving wife for sixty-one years and raised their daughter in a home full of laughter and love. A man of integrity, who was loyal to his family, friends, and colleagues, Jack will be missed by all.

The family of Jack D. Herren created this Life Tributes page to make it easy to share your memories.

Send flowers to the Herren family.