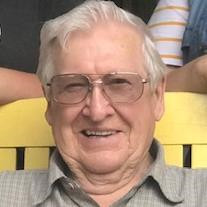 Jack B. Gilbert Sr., age 88, of Mattoon, IL passed away at 9:15 A.M. on Saturday, October 19, 2019 at Sarah Bush Lincoln Health Center in Mattoon, IL Funeral services celebrating his life will be held at 10:00A.M. on Wednesday, October 23, 2019 at the Mitchell-Jerdan Funeral Home, located at 1200 Wabash Ave., Mattoon, IL 61938 with Reverend Duane Pope officiating. Burial will follow at Resthaven Memorial Gardens in Mattoon, IL with Military Rites being conducted by the Honor Guard of the Mattoon VFW Post 4325. Visitation for family and friends will be held on Tuesday evening, October 22, 2019, from 5:00-8:00 P.M. at Mitchell-Jerdan Funeral Home with Masonic Services being conducted at 4:45 P.M. by members and guests of Mattoon Masonic Lodge # 260 A.F& A.M. Memorials may be made to American Cancer Society or Lincolnland Hospice. Jack was born December 6, 1930 in Earlsboro, OK. The son of John W. and Rosa N. (Ledbetter) Gilbert. He married Irene J. McSchooler on April 23, 1953 in Martinsville, IL; she passed away on March 24, 1988 in Mattoon, IL. He later married Jewell L. Morecraft on May 20, 1989 in Mattoon, IL. Survivors include his wife Jewell L. Gilbert of Mattoon, IL; two children, Jack B. Gilbert Jr. and his wife Cheryll of Charleston, IL and Mildred “Milli” Metzger of Mattoon, IL; one stepson, Ted A. Morecraft of Mattoon, IL.; five grandchildren, Stephanee I. Griffith and her husband Dustin of Arcola, IL., Katy R. Frankie and her husband Matthew of Neoga, IL., Jack B. “JB” Gilbert III and his wife Kayla of Westfield, IL., Gilbert “Gil” S.W. Metzger and his wife Mallory of Humboldt, IL., and Jackee I. Edwards and her husband Sidney of Mattoon, IL.; three step grandchildren, Spencer R. Morecraft of Golden, CO., Ireland K. Morecraft of Golden, CO., and Nevaeh L. Morecraft of Mattoon, IL; and sixteen great-grandchildren. He was preceded in death by seven brothers and his son-in-law Steven W. Metzger. Jack proudly served his Country and is a Veteran of the United States Navy. He was a retired Safety Supervisor of USI in Tuscola, IL. and a member of the Apostolic Center Church of Mattoon, IL. He was also a Noble member of the Mattoon Masonic Lodge # 260 A.F. & A.M. and a 32nd Degree Mason, a member of the Ansar Shrine of Springfield, IL., and Scottish Rite Valley of Danville. IL., Lifetime member of the Moose Lodge of Mattoon, IL. Jack will always be remembered by his legendary storytelling, his passion for attending auctions which led to quite a collection of possessions, enjoyment of cars and the people that attended those events. Forever an outdoor enthusiast, he enjoyed fishing, hunting and being in natural places. His creativeness, resourcefulness and problem solving nature earned him the title,” Jack of all Trades”, but his greatest achievement was his children saying they have learned a lot from their father. Please visit www.mitchell-jerdan.com or www.facebook.com/mitchelljerdanfuneralhome to light a candle in his memory with the family

The family of Jack B. Gilbert Sr. created this Life Tributes page to make it easy to share your memories.

Send flowers to the Gilbert family.