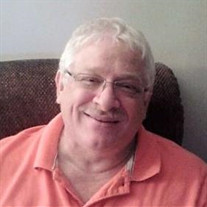 Jack M. Frost, age 62 of Mattoon, IL, passed away, Monday, August 19, 2019, following a four year battle with ALS, at his home surrounded by his wife and family. A memorial service in his honor will be held at noon, Saturday, August 31, 2019, at Mitchell-Jerdan Funeral Home, 1200 Wabash Avenue, Mattoon, IL 61938; Reverend Joy Starwalt will officiate. Military Rites will be conducted by Mattoon VFW Post 4325. A visitation will be held from 10:00 AM until the time of service at the funeral home. Per Jack’s request, those in attendance are asked to wear Chicago Cubs attire. Jack was born November 27, 1956 in Mattoon, IL to Melvin L. and Donna J. (Hill) Frost. He married the love of his life, Barbara Andrews on March 22, 1979 in Norfolk, VA. He is survived by his wife, Barbara and son, Jeremy Frost of Mattoon, IL; one sister, Brenda (James) VanMeter of Charleston, IL; two brothers, Kenneth (Beverly) Frost, and David Frost, both of Mattoon, IL. Jack is also survived by his stepsister, Debbie Grade of Clovis, NM; two aunts, Eileen of Charleston, IL, Mary of Florida; many loved nieces, nephews, cousins; and his grand-cats, Marty and Blurry. Jack was preceded in death by his parents, grandparents, numerous aunts and uncles, as well as his young nephew, David Frost. Jack joined the US Navy two weeks after graduating from Wilmington High School, and served aboard the USS John F. Kennedy (CV-67), as a radioman, during the Vietnam Era. Following his Honorable discharge from the Navy, he obtained his Associates degree in Teaching from Tidewater Community College in Virginia Beach, VA., while working in Civil Service at Naval Supply Center (NSC) and Navy Regional Data Automation Center (NARDAC) in Norfolk, VA. ; Jack continued his education and received his Bachelor’s degree in Computer Science from St. Leo College in Virginia Beach, VA. He continued his career at Naval Computer and Telecommunications Area Master Station Atlantic (NCTAMSLANT), Navy Environmental Health Center (NEHC) in Norfolk, VA, before retiring from Navy Medical Center Portsmouth (NMCP) in December 2011. Jack received numerous Civilian Awards during his 38 years of service. Jack loved to bowl and participated in several leagues, to sing karaoke, walk trails, and ride roller coasters. He told the worst groaner jokes and loved to share his beautiful smile and laugh with all of us. Memorials in his honor may be made to HSHS St. Anthony’s Hospice, 701 West Temple Avenue, Effingham, IL 62401 or the ALS Association, 220 W. Huron St #4003, Chicago, IL 60654. Please visit www.mitchell-jerdan.com or www.facebook.com/mitchelljerdanfuneralhome to light a virtual candle in his honor or share a memory with the family.

Jack M. Frost, age 62 of Mattoon, IL, passed away, Monday, August 19, 2019, following a four year battle with ALS, at his home surrounded by his wife and family. A memorial service in his honor will be held at noon, Saturday, August 31, 2019,... View Obituary & Service Information

The family of Jack M. Frost created this Life Tributes page to make it easy to share your memories.

Send flowers to the Frost family.