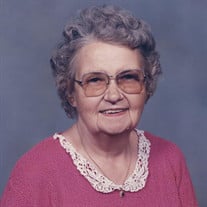 Irma Jean Davis, age 91, passed away Sunday, December 31, 2017, at 6:09 A.M. at Odd Fellow- Rebekah Home in Mattoon, IL. The funeral service in her honor will be held at 11:00 A.M., Wednesday, January 3, 2018 at Mitchell-Jerdan Funeral Home, located at 1200 Wabash Avenue, Mattoon, IL 61938, with Reverend Robert Warren officiating. Burial will follow at Roselawn Cemetery in Charleston, IL. Visitation will be held at the funeral home from 10:00 A.M. until the time of service. Irma was born July 15, 1926 in Charleston, IL, the daughter of Ed and Grace (Thomas) Ingle. She married Kenneth Dale Davis on December 28, 1949. He passed away in 1986. Irma is survived by her son, William Davis and wife Yvonne of Mattoon, IL; two grandchildren, Trevor Davis of Mattoon, IL , Nikki Bryant of Mattoon, IL; one brother, Glenn Ingle of Charleston, IL. She is preceded in death by one daughter, June Davis; one brother, Bill Ingle; two sisters, Mary Lovins and Edna Stites. Irma was a devout member of the East Side Church of Nazarene. She was the church pianist for many years and enjoyed playing for others at surrounding nursing homes. Irma dedicated much of her time to her family and grandchildren, who will miss her dearly. Memorials in her honor may be made to the East Side Church of Nazarene, 2129 S 9th Street, Mattoon, IL 61938. Please visit www.mitchell-jerdan.com or www.facebook.com/mitchelljerdanfuneralhome to light a virtual candle in her honor or share a memory with the family.

The family of Irma Jean Davis created this Life Tributes page to make it easy to share your memories.