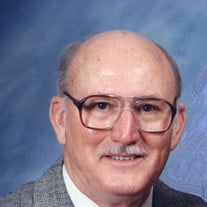 Howard Lavon Tingley, age 85 of Mattoon, IL passed away peacefully with his daughters by his side at 12:35 PM, June 6, 2021, at Odd Fellow-Rebekah Home. A funeral service in his honor will be held at 3:00 PM, Wednesday, June 16, 2021, at Mitchell-Jerdan Funeral Home located at 1200 Wabash Avenue, Mattoon, IL 61938. Pastor Matthew Froeschle will officiate. Visitation will be held from 1:00 PM until the service begins. There will be a meal following the service at First Presbyterian Church, Mattoon with interment following at Janesville Cemetery. Howard was born July 7, 1935, in Marshall, IL to the late Reuben Robert and Elsie Mae (Claypool) Tingley. He married Emma Rebecca “Becky” Davis on October 28, 1961, in Lerna, IL; she preceded him in death on August 31, 2018. He is survived by two daughters, Deborah Lee Cook of Savoy, IL, Sarah DeeAnn Young and husband Craig of Jasper, IN; five grandchildren, Jason Tingley of Newport News, Virginia, Logan, Aislinn, and Dawson Young of Jasper, IN, and Garrett Cook of Savoy, IL; and two great-granddaughters, Angel and Persephone (Robin) Tingley; two sisters, Betty Biggs of Decatur, IL and Sharon Wheeler of Champaign, IL. He is preceded in death by one son; Steve Lavon Tingley; three brothers, Robert, Reuben Jr., and Hobart Tingley and two sisters; Ferne Compton and Helen Tingley. Howard worked at Blaw Knox in the factory full-time for several years following his high school graduation at the age of sixteen and then decided to go to college full-time while continuing to work there. After graduating from Eastern Illinois University in three years with his Bachelor of Science in both Mathematics and Physics, he continued working there eventually ending up as Chief Plant and Industrial Engineer after devoting more than twenty years. He also worked at Tube-Lok Products for three years. Howard finished his career at Justrite Manufacturing in Mattoon, IL where he dedicated his considerable skills in a variety of roles for more than twenty-five years until his retirement. Howard was known as being a detail- oriented problem solver and had high expectations for himself and others but was known to be fair to all. Howard was a member of the First Presbyterian Church in Mattoon, IL. He was active in several organizations in his younger years serving as President of Toastmasters Club, President of the JC’s Club, and was a member of Mattoon Masonic Lodge being a 32nd Degree Mason, and Elks Lodge of Charleston, IL. Howard was a devoted family man and often said that Becky was the great love of his life and everything about her was “just perfect”. He would go on to list her many virtues as if the rest of the family didn’t already know how wonderful their mom and Grammy was. Howard loved when his kids and grandkids descended upon his home. His grandchildren brought him much joy, and he relished his role as “Pa” dispensing hard earned wisdom to each of them. Howard took meticulous care of his home, yard, and garden. He was most content when he was tending to his floral and vegetable gardens as he never got far away from his farm boy roots. Howard was a lifelong reader passing that passion on to both of his daughters. He was a collector of coins, knives, glassware, and furniture appreciating items that displayed craftsmanship and beauty. Howard was able to do some woodworking after retirement making items for family, but that hobby was cut short by his neuropathy limitations. Howard was a very determined man and kept moving long after others would have given up. The impact Howard left on his family and friends will be forever treasured by all. Please visit www.mitchell-jerdan.com or www.facebook.com/mitchelljerdanfuneralhome to light a candle in his honor or share a memory with the family.

The family of Howard L. Tingley created this Life Tributes page to make it easy to share your memories.

Send flowers to the Tingley family.