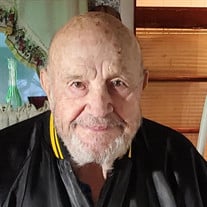 Howard “Ted” T. Livingston, age 90 of Mattoon, IL passed away on Tuesday evening, November 2, 2021, at his residence with his daughter by his side. A funeral service will be held at 10:00 AM, Tuesday, November 9, 2021, at Mitchell-Jerdan Funeral Home, located at 1200 Wabash Avenue, Mattoon, IL 61938; Pastor Ryan Hayden will officiate. A committal service will immediately follow at Zion Hill Cemetery in Paradise Township. The visitation will be held from 5:00 PM until 7:00 PM, Monday evening, November 8, 2021, at the funeral home. Ted was born on October 28, 1931, in Mattoon, IL to the late Aaron Livingston and Maggie Mae Jackson. He married Patty Jean Carie on May 2, 1954, in Lawrenceville, IL; she preceded him on death June 5, 2014. He is survived by his daughter, Marjeana D. Livingston of Mattoon, IL, and numerous nieces and nephews. He is preceded in death by four brothers, one sister, two half-sisters, and one half-brother. Ted honorably served our country in the United States Army. Throughout his career, Ted became a master technician and mechanic, retiring from Midas in Mattoon, IL after many years of service. Prior to this retirement, he was previously employed by Pilson Auto Center and KC Summers Auto Group in Mattoon, IL. He attended Bible Baptist Church of Mattoon, enjoyed spending time with his daughter, and working on automobiles. Ted will be lovingly remembered and sorely missed. Please visit www.mitchell-jerdan.com or www.facebook.com/mitchelljerdanfuneralhome to light a virtual candle in his honor or share a memory with the family.

The family of Howard "Ted" T. Livingston created this Life Tributes page to make it easy to share your memories.

Send flowers to the Livingston family.