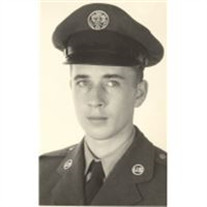 \r\nMattoon, IL-Howard W. Henne, age 76, of Mattoon, IL, passed away at Sarah Bush Lincoln Health Center, at 6:22 PM, Sunday, March 8, 2009. \r\nThe funeral service in his honor will begin at 6:00 PM, Thursday, March 12, 2009 at Mitchell-Jerdan Funeral Home, 1200 Wabash Avenue, Mattoon, IL 61938 with Pastor Richard Coon officiating. Visitation will be from 4:00 PM until time of service at the funeral home. Military rites will be conducted at the funeral home by the Mattoon VFW Post 4325.\r\nMr. Henne was born November 12, 1932, in Mattoon, IL, the son of Everett and Eunice (Griffith) Henne. He married Naomi (Trigg) Henne in 1957 in Cowden, IL. She survives. Other survivors include their children: Darlene Sargent and husband Leonard of Sullivan, IL; Denise Bell of Decatur, IL; Rhonda Torrans and husband Dan of Three Rivers, Michigan; Duana Hamilton and husband Bob of Mattoon, IL; and two sisters: Ruth Lucier and husband Bill of Mattoon, IL; and Carol Edwards and husband David of Humboldt, IL. He leaves eleven grandchildren and fifteen great-grandchildren. Mr. Henne was preceded in death by his parents, and two brothers: Richard Henne, and Louis Henne; and one sister: Madonna Lundy. \r\nMr. Henne had served our country with the United States Air Force in the South Pacific. He was a forty-four year employee of USI Chemical Plant near Tuscola, IL. He was a lifetime member of the Mattoon Moose Lodge and a member of the Mattoon Eagles. Howard was known to be a 'Jack of All Trades' having built his own home, worked on cars, and was a general handyman ready to help anyone in need. \r\nPlease visit www.mitchell-jerdan.com to light a virtual candle in his honor or to share a memory with his family.\r\n

The family of Howard W. Henne created this Life Tributes page to make it easy to share your memories.

Send flowers to the Henne family.