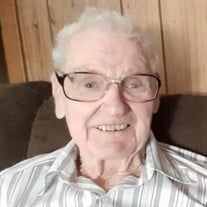 Howard L. Hanks, age 87 of Mattoon, IL passed away on Saturday, October 23, 2021, at his residence. A Celebration of Life will be held at a later date. Mitchell-Jerdan Funeral Home, located at 1200 Wabash Avenue, Mattoon, IL 61938, in charge of arrangements. Howard was born on December 27, 1933, to the late William and Ruth (Samuel) Hanks. He married Elsie M. Wilkey in May of 1967. She preceded him in death on April 24, 2017. He is survived by one son, Greg Hanks and wife Laura of Gays, IL; two daughters, Donna Howe and husband Bob of Kansas City, MO, Judy Smith of Kansas City, MO; five grandchildren: Tabitha Hanks of Mattoon, IL, Joshua Hanks of Hungary, Kyle Hanks and wife Peyton of Mattoon, IL, Becky Bowen and husband Jason of Hamilton, MO, Peggy Howe of Kansas City MO; and three great-grandchildren, Chase Bowen, Kimber Wilson, and Kara Wilson. He retired from Boeing Aviation after many dedicated years of service as a mechanic. A jack of all trades, Howard could always be found in his garage, piddling, tinkering, and fixing anything that needed repaired. He was truly remarkable at his handyman skills and taught many valuable lessons to his son and grandchildren. He took many drives to Neoga and Arthur, IL where he enjoyed conversations with just about anyone. Howard frequented many rummage sales, scouring for little treasures to pass along to his family, ones that they will cherish for years to come. Although known for his tough as nails personality and stubbornness, he had a soft spot when it came to his grandchildren. Howard lived a full life, many made, and friendships formed. Truly one of a kind, he will be lovingly remembered by all who knew him. Please visit www.mitchell-jerdan.com or www.facebook.com/mitchelljerdanfuneralhome to light a virtual candle in his honor or share a memory with the family.

Howard L. Hanks, age 87 of Mattoon, IL passed away on Saturday, October 23, 2021, at his residence. A Celebration of Life will be held at a later date. Mitchell-Jerdan Funeral Home, located at 1200 Wabash Avenue, Mattoon, IL 61938, in charge... View Obituary & Service Information

The family of Howard L. Hanks created this Life Tributes page to make it easy to share your memories.

Send flowers to the Hanks family.