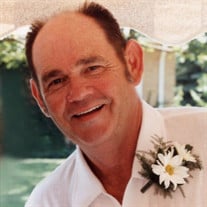 Howard Eugene “Gene” Bennett, age 84 of Mattoon, IL passed away at 9:20 PM, Wednesday, August 25, 2021, at Sarah Bush Lincoln Health Center. A graveside service will be held at 10:00 AM, Wednesday, September 1, 2021, at Dodge Grove Cemetery with Pastor Brad Brown officiating. Mitchell-Jerdan Funeral Home, located at 1200 Wabash Avenue, Mattoon, IL 61938 is in charge of services. Gene was born on July 8, 1937, in Mattoon, IL to the late Howard G. and Margaret J. (Tatman) Bennett. He married Sheila K. Gullion on February 22, 1964; she passed away on January 31, 1986. He is survived by one son, Michael E. Bennett of Mattoon, IL; one daughter, Kimberly K. Heldenbrandt and husband Charles of Toledo, IL; one granddaughter, Ashleigh J. Bennett of Mattoon, IL; one step-grandson, Alexander C. Heldenbrandt of Mattoon, IL; two great-grandchildren, Aarow J. Ayers and Brazen M. Carman of Mattoon, IL; one brother, Robert L. Bennett and wife Marty of Toledo, IL; and two lifelong friends, Jim Neason and Jack Howard of Mattoon, IL. He is preceded in death by one sister, JoAnn Davis. Gene retired from Coles County Housing Authority in Mattoon, IL where he was employed for over twenty years. Prior to his retirement, he worked for Bub Young Demolition. Gene was a founding member of Family Worship Center and enjoyed spending time with his church family. A true gun enthusiast, Gene added to his impressive collection over the years. He liked to hunt, travel, and bowl; however, spending time with his family was his favorite time spent. Please visit www.mitchelljerdan.com or www.facebook.com/mitchelljerdanfuneralhome to light a virtual candle in his honor or share a memory with the family.

The family of Howard E. "Gene" Bennett created this Life Tributes page to make it easy to share your memories.