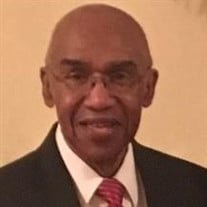 Herman Daniel Taylor, 82, Professor Emeritus of Eastern Illinois University, passed away on Tuesday, August 27, at Memorial Hospital in Springfield, Illinois. A funeral service will be held at 10:00 AM, Saturday, August 31, 2019 at St. John’s Lutheran Church, 200 Charleston Avenue, Mattoon, Illinois 61938; Reverend Adam Jacobsen will officiate. A visitation will be from 5:00 PM-7:00 PM, Friday, August 30, 2019 at Mitchell-Jerdan Funeral Home, 1200 Wabash Avenue, Mattoon, Illinois 61938. Dr. Taylor was born on February 26, 1937, in Yazoo City, Mississippi, the only child of the late George D. Taylor and Eddie Mae Woolfolk Taylor. The family relocated to Chicago in 1942 where Herman became a product of the Chicago Public Schools. His study of the organ began while a freshman in high school with Walter E. Gossette, a teacher he very much admired. He subsequently earned a bachelor's degree in organ performance from Chicago Musical College of Roosevelt University having studied with Robert Reuter and both the master's and doctorate degrees in organ performance from the University of Michigan under the tutelage of the renowned Dr. Marilyn Mason. Too, he held the AAGO Certificate from the American Guild of Organists. On July 21, 1970, Herman married Vivian Celestine Hicks of Jackson, Mississippi, and they became a musical team, presenting many recitals together. His teaching career of 30 years included tenures at Southern University, in Baton Rouge, Louisiana, and at Prairie View A & M University in Prairie View, Texas. At Dillard University in New Orleans he served as Chair of the Division of Humanities; and at Eastern Illinois University Dr. Taylor Chaired the Department of Music. At least in part Dr. Taylor's career was distinguished by the many, many prestigious honors and awards he received. For example: The Society of American Musicians Award in organ playing; Rockefeller Foundation Grant in organ which awarded him study with the late Marcel Dupre in Paris, France; Graduate Student Assistant in organ at The University of Michigan; Palmer Christian Award in organ; consultant in Giessen, Baumholder, Darmstadt and Frankfurt, West Germany, under the auspices of the United States Army Chaplaincy; and a grant from the National Endowment for the Humanities to participate in the summer seminar, "The Practice of Schenkerian Analysis." In 1985 Dr. Taylor was the recipient of a grant from the United Negro College Fund which afforded him the opportunity to conduct research on the organ music of African American composers. This research resulted in the CD of a lecture recital performed in Atlanta at the AGO National Convention and has been aired on Pipe Dreams on public radio a number of times. And in many respects perhaps a crowning achievement: Also in 1985, Dr. Taylor challenged himself to present the Johann Sebastian Bach Commemorative Organ Recital Series--performed from memory--to celebrate Bach's 300th birthday in 17 recitals in the United States and Western Europe. Despite his busy academic career, Herman was very active in church music and over the years served as organist and organist-choirmaster in churches representing ten different denominations in various parts of the country. He was an excellent accompanist and performed with many outstanding singers and instrumentalists. This phase of his professional life took him to Canada and Alaska, as well as to many college campuses and concert halls in the United States. He was a member of the St. John's Lutheran Church, Mattoon, where he served faithfully as organist for thirteen years. Herman Taylor leaves to mourn his memory a loving and devoted wife of 49 years; four children, Alicia Danielle Taylor of Orstad, Norway; Daniel (Christina) Taylor of Springfield, Illinois; Kristin Nicole Taylor of Los Angeles, California; Sharon Perry of Modesto, California; four grandchildren, Christopher, Nicholas, and Sofia Taylor; and Maria Taylor-Hellervik; three sisters-in-law, Roxann Miller, Madelyn (Victor) Griffith and Jacqueline Hicks of Jackson, Mississippi and a host of other relatives and friends. The family requests in lieu of flowers that donations may be made to the Herman D. Taylor Music Scholarship Fund of St. John's Lutheran Church, to the Alzheimer's Foundation, or to a charity of choice. Please visit www.mitchell-jerdan.com or www.facebook.com/mitchelljerdanfuneralhome to light a virtual candle in his honor or share a memory with the family.

The family of Herman D. Taylor created this Life Tributes page to make it easy to share your memories.

Send flowers to the Taylor family.