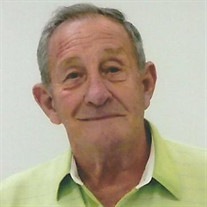 Mattoon, IL – Herbert E. Maycroft, age 81, of Mattoon, IL, passed away at 1:35 a.m., Thursday, August 20, 2015 at the Odd-Fellow Rebekah Home. The funeral service in his honor will begin at 11:00 a.m., Tuesday, August 25, 2015, at Mitchell-Jerdan Funeral Home, 1200 Wabash Avenue, Mattoon, IL 61938, with Pastor Brad Brown officiating. Casual attire is suggested. Interment will follow in Smyser Cemetery, Gays, IL. Visitation will be held from 10:00 a.m. until the service begins. Born October 7, 1933, Herbert was the son of Pearl and Sarah (Smith) Maycroft. He married Donna Claxon in Sullivan, IL, on March 20, 1954. She passed away March 12, 2011. Survivors include one son, Danny L. Maycroft and wife Debbie of Humboldt, IL; Three grandchildren: Zach Heinbaugh and wife Kendra of Toledo, IL, Brittany Maycroft and fiancé Brad Anderson of Mattoon, IL, and Bailey Maycroft and special friend Shane Kearney of Windsor, IL; and two great grandchildren, Jase Anderson of Mattoon, IL, and Kinley Heinbaugh of Toledo, IL. In addition to his wife, he was preceded in death by one son and three brothers. Mr. Maycroft served our country with the United States Army during the Korean Conflict. Prior to his retirement in 1996, Mr. Maycroft worked for Tate and Lyle Grain Elevator. He was a loyal St. Louis Cardinals fan and NASCAR fan. In his free time he enjoyed attending auctions and sales and spending time with his family, especially his children and grandchildren. Memorials in his honor may be made to Camp New Hope or the American Cancer Society. Please visit www.mitchell-jerdan.com or www.facebook.com/mitchelljerdanfuneralhome.

The family of Herbert E. Maycroft created this Life Tributes page to make it easy to share your memories.

Send flowers to the Maycroft family.