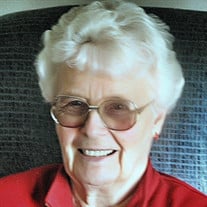 Hazel L. Fuller, age 91 of Gibson City, formerly of Mattoon, IL passed away on at 1:12 AM, Sunday, December 27, 2020 at Heritage Health in Gibson City, IL. A private family funeral service in her honor will be held at 11:00 AM, Monday, January 4, 2021, at Mitchell-Jerdan Funeral Home, located at 1200 Wabash Avenue, Mattoon, IL 61938; Reverend Ron Dickinson will officiate. A committal service will immediately follow at Rest Haven Memorial Gardens in Mattoon, IL. Hazel was born on December 6, 1929 in Cumberland County to the late Noble G. and Leota I. (Cordes) Soliday. She married George F. Fuller on January 25, 1948 at the Toledo United Methodist Church in Toledo, IL. He passed away on December 10, 1979. Hazel is survived by three children, Dan Fuller of Christiansburg, VA; Nancy Reese and husband Joe of Champaign, IL; Kathy Rardin and husband Steve of Monticello, IL; five grandchildren: Nicole Ingle and husband Chris of Cloverdale, VA; Gwenn Quintin and husband Richard of Christiansburg, VA; Michael Reese and wife Sarah of Urbandale, IA; Erin Grgurich and husband Rich of Mahomet, IL; Chris Rardin and wife Olivia of Whiteheath, IL; thirteen great-grandchildren; and one sister, Dorothy McElravy of Toledo, IL. She is preceded in death by one grandson, David Fuller; one brother and sister-in-law, Leroy Soliday and wife Betty; and one sister Charlotte Carrell; and one brother-in-law, Bill McElravy. Hazel was co-owner of the retail shop Mode O Day at the Cross County Mall for many years. She was later employed by Team Technology in Mattoon, IL as the office manager. A devoted member of Union Congregational Church, Hazel taught Sunday School and served as director of the youth choir. Hazel was actively involved as a Cub Scout and Girl Scout leader. She believed in helping those in need by becoming a dedicated blood donor. As a talented seamstress, Hazel showed her love through sewing many beautiful garments and gifts through out the years. She treasured the time spent with family and grandchildren on the farm. It was a happy place for everyone. She will be greatly missed. Memorials in Hazel’s honor may be made to Coles County Animal Shelter, 6818 N. County Road, Charleston, IL 61920. Please visit www.mitchell-jerdan.com or www.facebook.com/mitchelljerdan.com to light a virtual candle in her honor or share a memory with the family.

Hazel L. Fuller, age 91 of Gibson City, formerly of Mattoon, IL passed away on at 1:12 AM, Sunday, December 27, 2020 at Heritage Health in Gibson City, IL. A private family funeral service in her honor will be held at 11:00 AM, Monday, January... View Obituary & Service Information

The family of Hazel L. Fuller created this Life Tributes page to make it easy to share your memories.

Send flowers to the Fuller family.