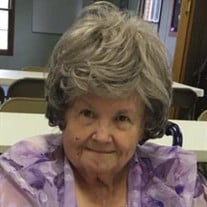 Hazel Lou Elliott, age 86 of Mattoon, IL passed away Monday, September 28, 2020 at her residence. A funeral service in her honor will be held at 11:30 AM, Friday, October 2, 2020 at Mullen Baptist Church, rural Montrose. A committal service will immediately follow in Mullen Cemetery. Visitation will be held from 10:30 AM until the time of service at the church. Mitchell-Jerdan Funeral Home, 1200 Wabash Avenue, Mattoon, IL 61938 is in charge of services. Hazel was born September 28, 1934 in Cumberland County, IL to the late Joseph Elmer and Edith “Josephine” (Carter) Grissom. She married Lonnie Dean Elliott on February 20, 1954 in Toledo. He preceded her in death on February 16, 1999. She is survived by two brothers, Dean Grissom and wife Ruth of Montrose, Curtis Grissom of Mattoon; one sister, Ellen Clark of Jewett; brothers-in-law, Richard Elliott of Oklahoma, Randy Elliott and wife Donna of Mattoon; sisters-in-law, Wanda Nevils and husband Dave of Winter Garden, FL, Billie and Bitsy Elliott of Mattoon, Ann Elliott of North Augusta, SC, Sofia “Sally” Angeles of Toledo, Marsha Grissom of Sanford, FL. She was preceded in death by three brothers, Donald, Richard and Dale Grissom; one sister, Ruth Croy; and brothers-in-law, Warren Croy, Don Clark, Don, Larry, Bill, Jerry and Gary Elliott; sister- in-law, Kathren Mann For over thirty years, Hazel and her late husband, Lonnie were the owners of Elliott Furniture in Danville. Hazel had a passion for attending auctions and socializing with family and friends. She will be greatly missed by her loving family and the community she so graciously served. Please visit www.mitchell-jerdan.com or www.facebook.com/mitchelljerdanfuneralhome to light a virtual candle in her honor or share a memory with the family.

Hazel Lou Elliott, age 86 of Mattoon, IL passed away Monday, September 28, 2020 at her residence. A funeral service in her honor will be held at 11:30 AM, Friday, October 2, 2020 at Mullen Baptist Church, rural Montrose. A committal service... View Obituary & Service Information

The family of Hazel Lou Elliott created this Life Tributes page to make it easy to share your memories.

Send flowers to the Elliott family.